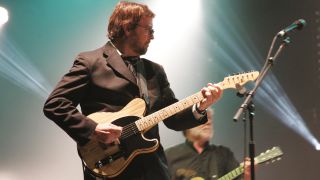 The term 'rock royalty' gets thrown around a fair bit but this time it's the only fitting description for the collection of names on a guitar that goes to auction in the UK on 11 December. It's signed by members of Led Zeppelin, Pink Floyd, Black Sabbath, The Who, The Beach Boys, Dire Straits… oh, and The Beatles.

We first reported on the guitar a few weeks ago while it was still gaining more signatures; so many they had to be added to its case. Now you can see the stellar cast of names that adorn the front of the Jerry Donahue signature Vintage V58JD.

Money raised by the sale will be used to pay for medical treatment and therapies for Donahue, the American guitarist who played a key role in British folk-rock with his work in Fairport Convention and Fotheringay during the late '60s and '70s.

Donahue, aged 73, suffered a severe stroke in 2016 and has been unable to play guitar since.

The 23 musicians who have rallied to sign the guitar include the three surviving members of Led Zeppelin, Eric Clapton, Paul McCartney, David Gilmour and ELO’s Jeff Lynne.

Dave Pegg, bass player with Fairport Convention is another signatory, alongside former Fairport guitarist Richard Thompson. A friend of Donahue's, Pegg has been one of the leaders of the fundraising drive; “What’s brought these stars together to help is the respect they have for Jerry," he says.

"They recognise he’s one of the greatest guitarists in the world with a unique style. The way in which Jerry could bend strings is totally different to English guitarists. No one else could do the multiple string bends, which is why guitar legends like Eric Clapton and Jimmy Page admire him so much.

He was also part of guitar trio The Hellecasters alongside fellow session aces Will Ray and John Jorgenson.

“Mentally, Jerry is all there," adds Pegg. "The problem is his muscles. He needs a lot of therapy but it’s very expensive and his medical insurance only covers so much. Our dream is to help him play guitar again.”

Donahue currently lives in Los Angeles and has lost the use of the right side of his body, including his hand. He also has problems with both speech and mobility.

Gardiner Houlgate in Wiltshire will host the auction on 11 December and the official estimate for it is in the region of £10,000-£20,000.

Auctioneer Luke Hobbs is used to seeing some signed and celebrity guitars pass through Gardiner Houlgate, including guitars played in the Beatles by George Harrison and The Bee Gees, but not on this level. “This guitar has been signed by some of the biggest names in British rock history," he notes. "They really are rock royalty.

“We’ve seen autographed guitars before but nothing like this. It’s like a Who’s Who of the greatest musicians the UK has ever produced. We’ve never come across any other guitar signed by all three members of Led Zeppelin and all three of the guitarists who played with 1960s hit band The Yardbirds – Eric Clapton, Jeff Beck and Jimmy Page. Paul McCartney also usually abstains from autographing equipment.”

As well as songwriting master McCartney, Beach Boys founder member Brian Wilson has also added his name to the guitar.

The guitar was donated by JHS Music and to support the cause, Gardiner Houlgate is also waiving its usual seller’s fee.

The auction will take place at Gardiner Houlgate, 9 Leafield Way, Corsham, Wiltshire, SN13 9SW on Wednesday 11 December. It will be sold alongside a collection of equipment used by the late British blues and rock guitarist Gary Moore.

For more info on the auction and public viewings visit Gardiner Houlgate.