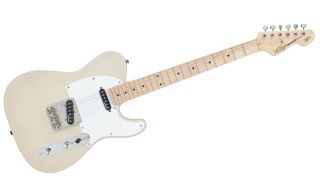 A host of guitar stars have signed a Vintage V58 like the one above (Image credit: Vintage Guitars)

They’ve all signed Jerry’s signature Vintage V58JD that has been donated by John Hornby Skewes Ltd for the auction, due to take place at Gardiner Houlgate’s Bath Auction rooms, on 11th December 2019.

During his career as a session guitarist, Jerry played for names including Plant, Elton John, George Harrison and Bonnie Raitt. Dave Pegg, Jerry’s old bandmate in Fairport Convention, explains how this incredible collection of names got involved to help Jerry; “It all started when I had a call from guitarist Matt Worley, another close friend of Jerry’s,” says Dave. “He’d acquired Jerry’s signature guitar with the idea to have a few big names sign it so we could raise some money for him.”

“At first we just asked a handful of people,” adds Matt Worley. “And with help from Tony Kelsey who co-opted the likes of Steve Winwood, Robert Plant, Andy Fairweather Low and Dave Pegg himself, word got out, the gates opened and we were swamped with some of the biggest names in the music business eager to autograph the guitar and pay their respects to Jerry.”

And there’s still signatures to be added from the likes of Black Sabbath’s Tony Iommi, ELO icon Jeff Lynn, former Jethro Tull guitarist Martin Barre, Led Zeppelin’s John Paul Jones. There’s reportedly not much room left on the guitar for more, so additional players will be adding theirs to the case.

With all three guitarists from the Yardbirds (Clapton, Beck and Page), the three remaining members of Zeppelin and a Beatle, the value of this guitar is hard to quantify. We’ll be finding out on 11 December!