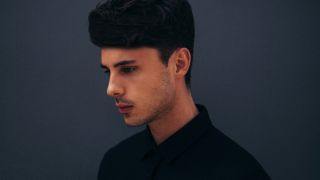 Based in Munich, 22-year-old SAINT WKND began his career with a series of bootlegs and remixes, building up a strong online following in the process.

With in excess of 25 million SoundCloud plays racked up, he’s now ready to release his debut EP Golden Youth, which will land later this year. As a taster for that, 2017 has already brought us Golden, his debut single. Check out an exclusive premiere of the TCTS remix of the track right here.

He may be at the beginning of his career, but SAINT WKND has already learnt a lot about the music making process, so we asked him to give us give five pearls of production wisdom...

“Every sound has a certain frequency and every musical note is basically a frequency. Check out this frequency table: whether you want to stack your song with FX sounds, drums, percs or any other type of sample, bear in mind that it will always sounds better if it matches the initial key. Pitching your samples up or down just for a few cents can make a huge impact. If you’re not sure about the key of your sample you can use a key detection tool.”

2. Use swing on drums

“Did you ever hear about the Purdie Shuffle? Damn, that dude got style. I guess you have to watch it in order to understand.

“I remember when I first started to lay down some beats in Fruity Loops. The Piano Roll is super smooth and I think there is no easier way to create a drum pattern. When you are starting out for the first time, the 4/4 beat becomes the go to beat, and there is nothing wrong with it - if you are producing electronic music such as techno, house etc. It’s part of the style and the repetition is key here.

“Keep in mind, though, that music was originally made by humans and not robots/programs. (Well, maybe in the future an algorithm will do that, but that’s another topic.) What I want to say is: our timing is not perfect! Try to play with different timings on your drums and get that swag going! It’s really easy to do it in FL Studio or Ableton. You can also use the swing/shuffle feature in your DAW to apply it to your drums.”

“I know, I know - it’s all about the synths. We are spending huge amounts of money on the next VST synth, which sounds even bigger than the previous one, but it doesn’t really make a difference if you don’t know about chords and structures.

“You haven’t heard about 7th chords? Go checkout the Camelot System and watch some tutorials about all those cheeky chords and how to structure them. All our ears are trained to hear these smooth progressions as they’ve existed since the beginning of music.

“Pro tip: You could start to learn how to play the piano at the same time. It’s actually easier than you might think, once you’ve nailed that head-finger coordination!”

“You’ve probably already heard the quote that ‘it takes 10.000 hours of practice to master a skill’. Maybe it’s not 10,000 hours, but it makes a difference when you start to take some time to learn how to master your instruments.

“Keep reading and learning, because that process should never stop (not just with music). You’ll quickly realise that the music keeps getting better and better. It has never been easier to learn a new skill set. All of the knowledge is already out there; just start to look it up on the internet.”

5. Go out and live your life

“This one sounds strange at first, but let me explain. At the end of the day, music is a piece of art and it’s transporting a feeling or a story. In order to write a great piece of music you really have to live your life at first. Make memories and put all your heart into a song, because it will become your outlet to YOUR memories and feelings. And it’s a beautiful thing that differentiates you from the rest of us.

“I think I’ve written the best stuff when I was sad about something, so don’t be afraid to use that negative feeling and turn it into something beautiful. Just go with the vibe!”