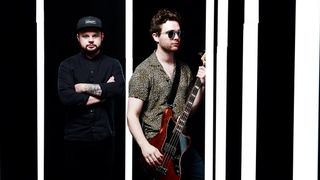 Want some pointers on how to play better with a bass player?

“Ben has always been a very sought-after drummer, even from an early age with local bands. In the studio it’s mad – once we find the tempo of the song that we want to play it’s almost as if the click can be on or off.

"I remember a lot of times in the studio we would forget to have the click on in Ben’s ears and he would record and it would still be exactly on the grid. He is very much on the grid.”

“Ben is tight, almost like a hip-hop drummer. But, he manages to do that without sounding like a robot. It has feel and flair amongst that tight playing. He knows how to push and pull over the top of that.

“Ben’s really creative. He still plays drums like he enjoys playing. You can tell someone who has been playing drums for years and is bored and just going through the motions.

"Ben is always looking for a good time, you can hear that in his playing. You can hear a massive difference when a drummer is enjoying themselves.”

“If I show Ben a riff, nine out of 10 drummers would all play the same thing to that riff. It’s about not doing the obvious moves and I think with Ben a lot of it comes down to his musical influence.

"But there’s a lot of new tunes where Ben would make these beats and send them over and we would construct the song from the drums up. That was a new angle that we hadn’t really done.

"A good idea, a chorus, a verse can just come out from being in a room together and, for lack of a better word, jamming.”

“One thing that we realised about recording is how I have a hatred for cymbals. I hate them so much. They have a time and a place but they are so overused. In the studio the whole game is controlling the cymbals.

"With a lot of these new songs there’s really tasteful cymbal use from Ben and that makes recording the drums so much easier.

"Everyone wants to hear the overheads, basically because that is reality, that is what drums actually sound like, you don’t put your head in a kick drum or right next to a snare drum. So you need to get the overheads right to have a great drum sound.”