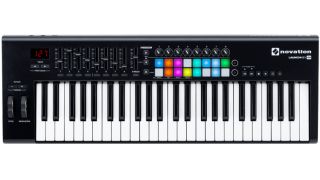 It’s an embarrassment of riches for Ableton Live users who want MIDI controllers that are dedicated to that software. They have great options such as Ableton’s own Push, the Akai APC40 MKII, Novation Launchpad Pro, and others.

But those are just pad controllers: For those who want a low-priced Ableton Live controller with a keyboard, Novation offers a newly updated Launchkey 49 MK2 (also referred to in some places as Launchkey 49 RGB), as well as 25- and 61- key versions. The big upgrade here is that the 16 launch pads are now colourfully lit so that they’ll correspond exactly with the colour of the clips in Live’s Session view (rather than having just red, yellow, and green lights as in the last version). The pads are also velocity-sensitive for better expression when using them to trigger drums and other MIDI notes.

The Launchkey 49 MK2 doesn’t stop at Live control, however. It has built-in InControl technology for adapting its controls to all major music software, with custom scripts for Propellerhead Reason and Image-Line FL Studio, and HUI control for other software. What’s more, three InControl toggle buttons let you switch sections of the Launchkey from their InControl settings to standard MIDI controls that you can map to whatever you want.

Once the controller is set up for Live, the board’s faders, knobs, and pads adapt to the active section of the software. In the Session view, the 16 pads provide a top row for launching clips and a bottom row for stopping them. Buttons navigate the track selected and the row of clips selected. Faders control track volume. When you select instruments, effects, or instrument and effect Rack devices, the knobs will map to the eight Macro controls of a Rack or to certain parameters of instruments and effects, while the pads may play notes from a Drum Rack, for example. That’s where the new velocity-sensitive pads come in very handy.

Three InControl buttons toggle the fader, knob, and pad sections from the custom Live control to standard MIDI controls, so you can use Live’s MIDI Map mode to set them to whichever controls you want. That’s a welcome feature for extending the reach of the Launchkey’s hardware while giving the user extra flexibility. Holding down an InControl key will also let you choose to control Live’s device, pan, Send A, and Send B settings as another layer of control.

The included documentation is a little light on explaining how to do everything in Live, but once you have it figured out, the Launchkey MK2 goes a long way to streamline the process of recording and playing back clips in the Session View, although the two rows of launch pads don’t fully substitute for larger pad grids of the aforementioned Live controllers; the Launchkey is really best for keyboard players who still want some Live performance features.

While it’s mainly featured as a Live-focused controller, the Launchkey MK2 also has scripts for controlling the devices of Reason and FL Studio. I tested it with Reason 8.3, and the controller has mappings for every Reason stock instrument, effect, and mixer device.

A typical control layout for a Reason synth like Thor or Malstrom controls a filter and amp envelope with the first eight faders; the master volume with the ninth; filter, LFO, and effect parameters with the eight knobs; and on/off switches for oscillators, noise, LFOs, filters, and so forth for the first eight fader buttons; and for certain devices, the 9/Master fader button switches to a second bank or mode for the device, giving you a second set of hands-on controls for that device.

This setup for Reason will relieve a lot of the tedium that can come from trying to operate the program with just a mouse or trying to map all the devices on your own.

The Launchkey 49 MK2 works as a class-compliant MIDI controller for iOS devices, so you can quickly play synth apps with it, and if the app supports MIDI Learn, map parameters to the Launchkey’s controls. But also with the InControl technology (which is completely firmware based), the Launchkey integrates more intimately with Novation’s own free (with in-app purchases) Launchpad and Launchkey apps.

The Launchkey app is an analog-modeling synth that locates eight “nodes,” or clusters of parameter values across the touchscreen. Drag the nodes across the screen to morph the sounds, or use the hardware controller’s pads to cycle around the nodes and then use the eight hardware knobs to adjust their values for the filter, noise, effects, amp level, and more.

The keyboard’s Track keys will also switch back and forth from the Launchkey app to the Lauchpad app. The latter app is a touchscreen approximation of the Novation Launchpad hardware. It has a button grid populated with loop or one-shot samples (which you can expand with in-app download purchases), as well as eight channels of mixing with filters, levels, and highly editable tempo-based effects. Use the Launchkey MK2’s hardware pads to launch sample and trigger effects from the Launchpad app, all while the Launchkey app’s synth sounds are still available on the keyboard.

This kind of iPad/controller synergy is what it takes to make the iPad a stronger force for live performance and music production, and you can come up with some strong results from the Launchkey app’s excellent sounds and the Launchpad app’s deep loop-remixing abilities. The one caveat is that, because the Launchkey controllers draw USB bus power from computers or from an AC adapter (sold separately), to work with an iPad, it has to draw juice from a powered USB hub and then connect to an Apple Camera Connection adapter going into the iPad.

With so many MIDI keyboard controllers in the world, it’s a challenge for any of them to stand out. The Launchkey 49 MK2 makes its case because it’s a powerful tool for Ableton Live, first and foremost, nearly as capable for Reason and FL Studio, and functional for any other MIDI software. And at this price, it also won’t sink your finances—it’s about as low as a 49-key controller gets with this much functionality, and as a trade-off, the keyboard’s construction is of acceptable lightweight quality, but doesn’t have all the bells and whistles and physical robustness of more expensive options. For example, the keys are unweighted, pure synth action, which I didn’t mind at all, though others might. The simple 3-digit display just shows the 0-127 value of the chosen knob or fader.

However, where it really counts, as in the quality of the pads, buttons, and other controls, the family of Launchkey MK2 controllers do not disappoint. The knobs and faders are sturdy, and the launch pads, while smaller than MPC-type drum pads, are very playable. And with the InControl toggle keys effectively doubling up the amount of hands-on control, the Launchkey 48 MK2 makes a strong case for an affordable Live controller that also works for other DAWs and iOS apps.

Documentation could use more specifics. To plug into an iPad, you have to use a powered USB hub.