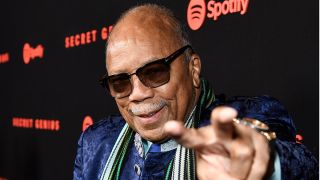 MusicRadar's best of 2018: Quincy Jones has taken aim at the current generation of producers, labelling them “lazy and greedy”.

In an interview with Vulture he was asked if, in contemporary songs, there are any technical or sonic production techniques that feel fresh, and his response was pretty damning. “There ain’t nothing new,” he said, adding that modern producers “don’t know what they’re doing.”

Jones also had some harsh words for today’s musicians: “Musical principles exist, man,” he said. “Musicians today can’t go all the way with the music because they haven’t done their homework with the left brain. Music is emotion and science. You don’t have to practice emotion because that comes naturally. Technique is different. If you can’t get your finger between three and four and seven and eight on a piano, you can’t play. You can only get so far without technique. People limit themselves musically, man.”

In a wide-ranging and incredibly frank interview, Jones also called Michael Jackson “as Machiavellian as they come,” said that his first impression of the Beatles was that they were “the worst musicians in the world,” and suggested that U2 are no longer making good music because there’s too much pressure on them.

When asked who impresses him at the moment, he praised Bruno Mars, Chance The Rapper, Kendrick Lamar, Ed Sheeran and Sam Smith. He also named Mark Ronson as someone who “knows how to produce”.

Jones, who will be 85 next month, is currently promoting a new Netflix documentary and CBS special.