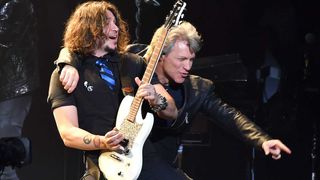 MusicRadar's best of 2018: We could give you a laundry list of reasons why we love Phil X, but chief among them would be his infectious enthusiasm for the instrument and his innate ability to throw himself headlong into every nuance of the material and totally own it.

Here is a guy who has had an all-star session career playing with the likes of Adam Lambert and Chris Cornell, and on movie scores such as Paul Fieg’s Ghostbusters reboot, who has his own band, the Drills, and is now firmly established as lead guitarist for Bon Jovi, with over 200 shows under his belt. But, as he tells it, he still has a way to go on guitar. Why? Well, because you never stop learning.

“A lot of people send me messages like, ‘Man, I’d die to hear you on a seven-string or an eight-string’ and I feel like I’m not done with six!” he says. “There are no limitations. Think about everything that you could accomplish on guitar, and I don’t think I am even close.”

The key to this exploration lies in his enthusiasm. That is what gave him the work ethic to play three shows a day then practise till dawn, sleep a few hours then go again. Is remembering to have fun - to have a good time all the time - one of his top five tips? No, but maybe it’s number six.

“Having fun is such an important part of it,” he says. “I feel like when I walk onstage with my band, or I get up at a jam, or I get up onstage with Bon Jovi in front of 60,000 people, if you’re not having fun then why are you even doing it?

“It’s one of those things where I really feel like I’m enjoying myself, and I think the audience feels that. And I’m having fun. When you have fun, the audience has fun. I have great memories of just making eye contact with so many people in the audience and then having a great time, and then feeling, ‘Okay, I’m a part of that. That’s great!’”

So what does Phil think is essential? Well, a good ear for one. And that you can train with practice, with getting inside other artists’ heads, working out chord progressions. Knowing when to rein yourself in helps, too.

“If you’re doing the solo to Livin’ On A Prayer you wanna do the solo on the record,” he laughs. “You don’t wanna improvise!”

If that advice sounds peculiar to his day job as Richie Sambora’s successor, it is, but read on, because the rest we can all relate to. It might just change your playing. Maybe even your wardrobe, too.

1. Learn as many cover songs as you can

“I think the big part of that is you learn a lot about chord structures and harmonic overtones, melody. You learn all that stuff, and I think that is a great way to train your ear for when you want to be able to put music together, or even write music. Anything like that really helps develop your own style as well, as it’s great to have a repertoire of covers any time you wanna get up and jam somewhere.

“My [learning] experience was back before YouTube! [Laughs]... Way before YouTube! And even before tablature. I mean, I was just learning stuff so I could go out and play in a cover band and make some money. Where I grew up in Toronto, Canada, you basically played in a cover band to be able to make money to then do an original band, so you would be doing covers and writing at the same time.

“But developing an ear is so important, because I find that I was doing so many sessions because I had a great ear. I don’t read per se. I don’t read notation. Other guys that come into the session would read and I would totally depend on my ear, and producers picked up on that. They thought, ‘Oh, this guy learns by ear, and his ear is great so let’s keep getting him.’

“And I think it gives you a little bit of an edge ‘cos you’re applying your instincts, learning so many songs; it’s one of those things where it gives you an outlet for your instincts when you hear a piece of music that actually dives in from the heart as opposed to reading something.”

2. Memorise all the notes on the fretboard

“The more you know about the fretboard, the better off you are - the more you look at the fretboard and know where you are. For example, where every A note is. You’ve got 11 or 12 As depending on how many frets you have, but know your fretboard. It’s probably one of the most important things.

“The other thing is: sing. If you can sing a solo, hear it in your head and then just know where your fingers go; that is also an important factor in becoming a better player.”

3. It’s not just your guitar you need to master - it’s amps, effects, speakers . . . And your choice of footwear and trousers too!

“And when you plug in a Plexi, personally speaking, when I plug into a Plexi - an old Marshall, say, a ’69 without the master volume so it’s really loud and it’s very clean - when I play that amp I gotta pick lighter because if I hit it the way I hit a high-gain amp it is very spongy and the attack isn’t anywhere I need it to be when I play a tighter amp.

“The speakers don’t respond quick enough, and the power tubes don’t respond quick enough for you to play super-fast if you’re picking hard. I’ve learned that a long time ago; you’ve got to play the amp like you play the guitar. It’s like you have to play a pedal. You have to play the speakers. It’s all conducive to your style and sometimes your style has to change to accommodate the different responses that speakers have.

“I’d love to see what Jimmy Page comes up with on a [Ibanez] JEM through a high-gain Mesa/Boogie Triple Rectifier or something like that. That would be educational to watch. Another thing with me, it’s a feeling thing; it could be 120 degrees out, and I go to the studio wearing pants because I feel like I play different when I wear shorts. [Laughs] Even shoes!

“I used to play in two bands in LA, and in one band I wore big boots and in another band I played I wore sneakers and I felt like I played completely different. [Laughs] I feel like, when I’m in the studio recording, and I was doing all these sessions, I would stand. I would show up at a studio where I haven’t been before and they’re like, ‘Here’s your stool, your chair’ and I’m like, ‘No, man - I’m cool. I’m gonna stand.’ Because I feel like if I sit it sounds like I’m sitting and when I stand it completely sounds like I’m standing. I feel like the energy is completely different.”

4. So you wanna play fast? Get your picking hand talking to your fretting hand

“I also had this thing called ‘conquer the lick’ where I would try to come up with really crazy, abnormal licks that my fingers weren’t accustomed to and I wouldn’t put down the guitar until I had nailed it, and that not only helped me gather my vocabulary of personal favourites of my own licks but it also developed my technique.

“You can see that they are not talking to each other, and that’s where sloppiness comes from - and I actually have that a lot since I had kids because I don’t practise as much as I used to! [Laughs] At the same time, I know when I am nailing it and I know when I am not nailing it, so I know when it needs work. I don’t think a lot of people put enough effort into that.

“Well, you want to play fast and you want to play articulate? That’s not going to happen by tomorrow. It takes a lot of work, and a lot of people don’t wanna practise something at a very slow tempo - and when I say a very slow tempo I’m talking 70 to 75 beats per minute, where you hit a note per quarter note, and whether it’s Flight Of The Bumblebee or whether it’s the Crossroads Steve Vai/Ralph Macchio thing from the movie, just play it nice and slow and get it as clean as possible before you take it to the next tempo, which is just going up in 1bpm increments.

“That’s when you serve yourself when you want to be a fast player because being fast and with a lot of gain and being sloppy is not as punch-you-in-the-face as somebody who plays fast and really precise.”

5. And above all, work hard on finding your own style

“A piece of advice that I heard once was something that I always applied when I was learning guitar, but it came from a reliable source and so it confirmed and verified my thoughts: your favourite guitar player already exists.

“I learned early on, when I was 16, 17, I was constantly playing guitar and even when I was doing three 45-minute sets of covers with my band, they would go and party and I would go to my room and would woodshed on my guitar until 5am, and then I’d sleep a little bit, then I’d get up and play all day and do the three 45-minute sets again. What came out of that was inventing my own licks. I kept on coming up with licks that I didn’t think I had heard before and that developed my own style.”

Bon Jovi embark on an extensive world tour in 2019.