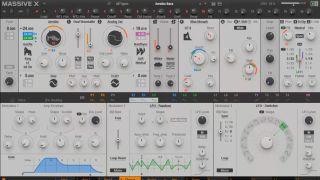 It’s no exaggeration to say that Native Instruments’ Massive X is one of the most eagerly-awaited plugin synths in history. Announced in 2018 alongside the Komplete 12 bundle, we were initially told that it would be released in February of 2019, but this date then slipped to June, and detail has been scant.

Now, finally, that detail is starting to arrive, thanks to the new Massive X Lab blog series on Native Instruments’ website. Over the next few months, this will cover all aspects of Massive X - design, oscillators, filters, preset design, etc) but the starting point is a general overview.

As you can see the Massive X interface is a big departure from the original Massive and, arguably, much clearer. There are nods to its predecessor, though, such as the ‘saturn rings’. It’s worth repeating, though, that this isn’t ‘Massive 2’ - it’s not compatible with Massive and isn’t a replacement for it. It is, however, being created by the same team.

In terms of architecture, you get two wavetable oscillators that will offer 125 wavetables at launch. These come from the creator of the original Massive and are designed to showcase what the new synth can do.

Go deeper down the rabbit hole and you discover that these oscillators have 10 modes (some of which have up to three sub-modes), each of which has its own character, and that the main oscillators can be modulated by two phase modulation oscillators. What’s more, some of the oscillators are specifically designed to be phase-modulated.

Moving on, there’s a dedicated Noise section that lets you use two simultaneous noise sources (you can choose from more than 100). Options here extend to ‘natural’ options such as rain and birdsong.

Elsewhere, there are eight all-new multimode filters. These cover low-, high- and band-pass options, plus comb filtering. You also get dual filters: one parallel, one serial, with selectable filter combinations for both.

The three Insert FX slots, meanwhile, can be used to introduce new elements and polyphonic processing into the internal signal path. In fact, as well as effects, you can also drop in Insert Oscillators (sine, pulse width, modulation-capable pulse, or saw), enabling you to work in a subtractive synthesis manner (without even using the wavetable oscillators) or to create intense DX7-style phase modulation environments.

There are also Unit FX; up to three of these can be applied simultaneously to the final patch. All-new delay, reverb, distortion and flanging algorithms are included, and NI thinks that they sound pretty special.

Flexible audio routing is part of the Massive X package, too. You can click and drag connections between the different modules, enabling you to shuttle audio around as you wish, and to multiple destinations. You can even use one wavetable oscillator to phase modulate the other, or set up a wavetable to modulate itself via an aux input.

As in the first Massive, envelopes and LFOs sit side by side, but you can now use up to nine. The first of these is always an envelope, but the other eight can be configured as you like. New features include the Switcher LFO, which enables you to assign up to three modulation sources to the LFO to control morphing between shapes. You can also route the modulators into the audio bus.

Next, we have the three Performers, which let you draw precise rhythmic modulation using specific shapes at specific time signatures. The Remote Octave, meanwhile, promises live or sequenced triggering of up to 12 Performer snapshots. Finally, there are four trackers that allow incoming MIDI data to operate as assignable modulators.

There’s plenty to chew over already, then, but what we still don’t know is exactly when Massive X will be released (it says June elsewhere on the NI site, but there's no actual date) or how much it will cost. You’ll note that video and sound examples are conspicuously absent at this stage, too.

This will inevitably lead to concern that the launch of Massive X is still some way off, and there will be a certain amount of frustration among Komplete 12 owners who bought their bundle on the assumption that they’d have Massive X in their hands by the end of February.

The pressure’s on for Native Instruments, then: not only does Massive X have to meet the demands of those who’ve effectively already paid for it, but it’ll also have to attract new users who have far more options available to them than they did when the first Massive was released over a decade ago.

Let’s hope it’s worth the wait.