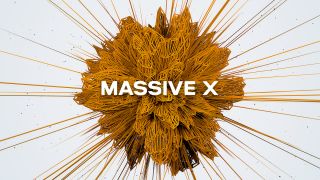 Native Instruments’ Massive has proven to be one of the most enduringly popular software synths of all time. More than a decade after its release, it’s still a big favourite among computer musicians. That said, we were certainly due an update, and we can now confirm that it’s coming in the shape of Massive X.

This is a completely new plugin synth - it’s not compatible with its predecessor and is designed to co-exist with it - and has been created by the team who came up with the original more than 10 years ago.

Unfortunately, there’s not much more in the way of public information about the synth at the time of writing. The UI is still under wraps, although we have seen it and can confirm that it has a more modular design than its predecessor, which enables synth elements to be changed and  rearranged a little like Reaktor Blocks, albeit stopping slightly short of fully modular routing.

On the downside, Massive X won’t arrive until February, when it will be made available for free to Komplete 12 owners and at a discounted crossgrade price for owners of version 1. We’ll bring you more details as and when we get them.