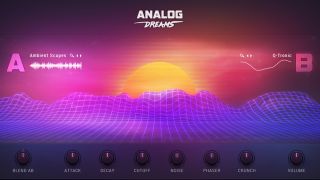 NI's Komplete 12 software bundle is on the way, and one of the key new elements is Kontakt 6. This builds on the design of the longstanding sampler with some subtle refinements, while retaining the existing workflow.

From a user perspective, the most interesting aspect of version 6 is the new dual-layer design, which will be used for all new official Kontakt instruments. This gives users two main timbral elements to each sound, with simple controls for blending and modulating the balance of these.

The new design is shown off by a trio of new sample instruments: Analog Dreams, Ethereal Earth and Hybrid Keys. Version 6 also brings three new reverbs, including a module based on NI’s excellent Replika plugin. There’s an intriguing new wavetable engine, too.

For instrument builders, meanwhile, NI has announced a new standalone app called Creator Tools, which is designed to ease creation of Kontakt instruments via its included Debugger and Instrument Editor elements.

The other interesting development on the Komplete front is the news that a variety of Expansion packs will now be included. These sample and preset bundles - previously known as Maschine Expansions but recently broadened in scope - bring an assortment of genre-themed sounds to the included synths and instruments.