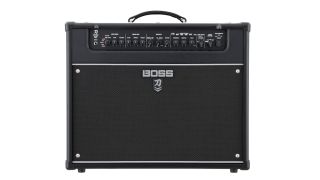 NAMM 2020: Launched in 2016, the Katana amp series was an instant hit, packaging great-sounding amp modelling into affordable, user-friendly boxes. For 2020, following hot on the heels of the recent Katana MKII comes the second iteration of the range's premium model, the Katana-Artist MKII.

A stage-ready 100-watt combo, the Katana-Artist MKII gets new hardware features in the form of a contour control, solo boost and new variations on the five original amp types (brown, lead, crunch, clean and acoustic) of its predecessor, bringing the count up to 10 different tones. However, that brilliant greenback-like Waza 12-inch speaker, which we loved on the original Katana-Artist remains in situ.

What's more the new model boosts the simultaneous effect options from three to five and that aforementioned solo boost now has its own level control on the front of the amp, meaning there's loads of tonal flexibility and control on offer, whether using the hardware knobs or Boss' Tone Studio software editor.

Interestingly, there's also an external dual amp control, which essentially enables you to use two Katana-Artist MKII's together, allowing new blends of tones and even spreading stereo effects between the two. Given the Katana-Artist MKII is set to retail for $599.99, owning two of them is not an impossible dream, either...