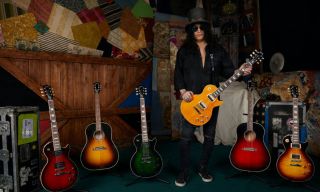 NAMM 2020: Slash's stature in the guitar world is is now at the stage where he doesn't just get a refreshed signature model but a whole collection. Gibson clearly love him even more than we do – and they've got two new signature J-45 acoustics and four Les Paul Standards to prove it.

Of course, these aren't Slash's first signature Les Pauls, but additional touches exclusive to this collection are Slash’s 'Scully' signature drawing on the back of the headstock, his signature on the truss rod cover (with a blank truss rod cover in the case), Slash’s new Ernie Ball strings, and four Slash Jim Dunlop Tortex picks.

He's certainly picked a great model to start with; the J-45 has been handled by many legends through rock, country and blues history.

The Slash Collection J45 nods to the past with a few modern additions. Again, there's Slash's requested rounded C-neck profile, plus a fatter and more modern 16'' fingerboard radius .

They've chosen the electronics well;  the LR Baggs VTC pickup is one of the best around for organic character.

Again, Collection guitar buyers will get  that 'Scully' signature drawing on the back of the headstock and the other details. And there's tow finish options for this; that very appealing November Burst and a Vermillion Burst.

"Developing my new Collection with the new team at Gibson has been really exciting,” says Slash. “The quality and attention to detail is next level, and these guitars truly reflect what I play live and in the studio. I think guitarists will be inspired by what we've put together.”