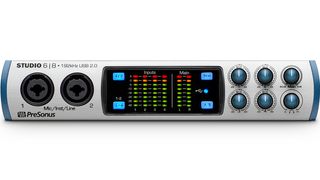 The Studio 6|8 is geared up for the smaller studio

Aimed at mobile producers and DJs, the bus-powered 2|6 features two combo mic/instrument/line inputs with phantom power and a quarter-inch headphone jack at the front, and four balanced quarter-inch jack outputs at the back (Main and Line). Intended for the home studio, the 6|8 adds to that with two rear-panel line/instrument inputs and S/PDIF I/O, but appears to require its own power supply.

Other notable features common to both include LED metering for all analogue inputs and the Main out, and the Cue Mix A/B function, which enables DJs and engineers to flip between two mixes while monitoring through headphones. As you'd expect, the Studio 2|6 and 6|8 also include PreSonus's Studio One Artist DAW for Mac and PC.

The Studio 2|6 and Studio 6|8 are both available right now from all PreSonus dealers, priced $199 and $299 respectively. Find out more on the PreSonus website.