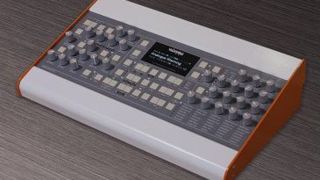 MUSIKMESSE 2018: While many synth manufacturers are saving up their new wares for the Superbooth show in May, Exodus Digital is choosing to launch its new Valkyrie instrument at Musikmesse, which kicks off on 11 April and runs until 14 April.

It looks a pretty juicy piece of hardware, too: Valkyrie is 8-part multitimbral and offers two groups of 32x oversampled oscillators per voice (the total number of oscillators is 1280) with hard sync, ring mod and FM. Dual PCM wavetables provide you with 4,096 waves, while the dual analogue ladder modelling filters come in 12 and 24bB flavours.

Other features include a modulation matrix, a stereo hypersaw, an arpeggiator, three EGs and three stereo LFOs with 64 shapes and MIDI sync. There’s a nine-module FX unit and Valkyrie offers 128 notes of polyphony.

Ambitiously, Exodus Digital has come up with its own hardware design and operating system for Valkyrie, stating that DSP chips are “obsolete technology from the ‘90s”. It uses less than 10W of power and can start up in less than four seconds, apparently. What’s more, we’re told that this will be a “mainstream synth that will launch at a mainstream price”.

Both rack and keyboard versions of the synth are in development, and we’re hoping to find out more later this week. As things stand, the only official information you can find online is on the Exodus Digital SoundCloud page.