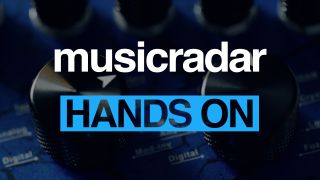 It’s not hard to think that, here at MusicRadar, we are utterly obsessed with gear. So what better opportunity to geek out with all the latest guitar and tech products than to bring you our first impressions in video form?

We’ll keep updating the list regularly, so be sure to check back on a regular basis.

Gibson’s 2019 electric guitar range has landed and it’s fair to say that the buzzword is ‘heritage’. Although we couldn'y quite fit the 25-strong range into our vast studio space, we did manage the Les Paul Doublecut, SG Standard and Les Paul Tribute.

This time we're lending our delicate hands and dulcet tones to an in-depth analysis of Fender’s Jimmy Page Mirror Telecaster electric guitar - minus the mirrors.

We cherry-pick three of Fender’s latest American Performer range for a slice of the hands-on treatment. Highlights this time around include Fender’s newly designed Yosemite and DoubleTap pickups, Greasebucket circuitry and push/pull electronics.

Check out our first impressions of Squier’s latest dual-humbucker Offset budget guitars, which certainly offer a lot of bang for your buck.

The Black Spirit 200 is utterly packed to the gills with features, including Bluetooth, onboard reverb, delay and modulation effects, power amp sagging control, Red Box DI output with eight cab simulations and outputs for cabs and FRFR speakers - oof!

Marshall's Origin series has been one of the most exciting amp announcements this year. We got our hands on the 20H, possibly the series’ most sought-after configuration, which packs power scaling, a DI out and a nifty tilt control in place of old-school Marshall input jumping.

The MT 15 is packing Bogner-like high-gain tones and cleans not dissimilar to a Twin in a compact package, but perhaps the most surprising thing of all is the price: $649/£490. There’s a lot to like with the MT 15, including those natty channel-switching LEDs.

Nutube technology takes a bow in its first commercially available product, the Vox MV50 amp heads. The line-up consists of AC, Clean and Rock versions, with each model pounding out a very respectable 50 watts of Class D power.

With a price point that pits itself against the likes of Line 6’s Helix LT and the HeadRush Pedalboard, Mooer’s effort needs to bring some serious heat in the specs department. Fortunately, the GE300 packs 108 digital amp models, as well as 164 effects, 43 optional factory cab sims and a fully featured IR loader.

A slight break from the normal lineup, this time we had the pleasure of Headrush’s very own Dan Weston come down to our humble abode to give us a first look of the new Headrush Gigboard.

Joining the Expression Overdrive and Ambient Delay, this purple treadler retains its brothers' solid build quality, and boasts five waveforms (including the uni-vibe-like Harmonic mode) and a rather fine spring reverb.

We get our hands on the Pugilist Distortion, Level Set Buffer, The Bends Compressor, Marine Layer Reverb, Mirror Image Delay and Santa Ana Overdrive and give our first impressions on this sextet of effects; Fender's first official foray into the world of stompboxes.

TC Electronic one-ups its ubiquitous Hall Of Fame Reverb with a sequel, which packs a shimmer mode and the company’s intriguing new MASH footswitch.

Combining a loop switching pedal and a multi-effects unit, the MS-3 could certainly save space in most guitarists’ rigs. Six internal effects can run at once, while a plethora of I/O awaits, with the ability to plug in three external pedals, and MIDI and expression control also catered for.

Watch as we take on the herculean task of getting ‘hands-on’ with 11 pedals in record-breaking time.

It was one of our highlights of this year's NAMM show and now have had the chance to reacquaint ourselves with its wail-happy charms.

In this instalment, we take a trip into the echo-laden world of Electro-Harmonix's Canyon delay and looper pedal.

We’re getting down and dirty with two of the most talked-about fuzzes on the market right now.

This time it’s Korg’s newest Volca, the Nubass, that takes a turn on the chopping block. Equipped with the burgeoning Nutube technology, one would be forgiven that this particular Volca is all about the screaming distortion and huge, ballsy low end. However, all is not quite what it seems as we take a closer look at the acid house tool and notice that, perhaps, it’s not all about the Nutube after all?

Medusa is comprised of an analogue synth engine supplied by Dreadbox, paired with digital synthesis and sequencing tools developed by Polyend. This is more than just a simple case of strapping a digital step sequencer to a subtractive synthesiser though; features such as wavetable oscillators, three-dimensional playable pads and full parameter sequencing aim to make this an instrument that can do cutting-edge sound design just as well as it does vintage analogue.

Here we tackle the Grandmother, Moog’s new head of its semi-modular family. Although emblazoned in what has been noted as quite a divisive livery, the Grandmother is pure fun, and rammed with all the character expected from a product with such rich heritage.

Joe Rossitter and Simon Arblaster go back to a time before MIDI and control voltages to have a little tinkle with one of the most revered and recognisable synthesizers of all time, the grand old CS-80.

After a slew of Boutique models utilising its own Advanced Circuit Behaviour circuitry, Roland has taken the diminutive synth format into analogue territory, albeit with the help of Studio Electronics.

The general consensus is that the original Circuit is a fine instrument. So it was little wonder that Novation wanted to build on that success by expanding the family with an analogue monosynth version, which, we're sure you'll agree, is pretty darn fine too.

The latest edition to Pioneer DJ’s collaboration with Dave Smith Instruments, the Toraiz AS-1, gets a spell on the test bench.

Does the Model:Samples have enough power to sate your sampling needs, or should you be saving those extra pennies and hold out for a Digitakt instead? Watch to find out.

Swedish noisenicks, Teenage Engineering are back again with some new Pocket Operators. Both the PO-33 K.O! micro sampler and PO-35 Speak voice synth join the PO-32 Tonic to create the ‘steel series’ and utilise the same microphone featured on the Tonic.

We take the Elektron Digitakt for an early spin, fresh out of the box, and check out some of the features of the latest sampling drum machine to come out of Gothenburg.

Taking the standalone theme much further with the inclusion of the lithium-ion battery, we take a look at the new features adorning the newest sampler on the block.

We check out how the drum machine stacks up against similar priced beat-makers and does the predominantly 'touch' interface work for this type of instrument?

If you’re looking for a straight-up x0x-style drum machine then jog-on, because you won’t be getting any of that here. Instead, the DFAM exudes esoteric noise with superior low-end weight and pitchable tones suited to practically every genre known to humankind, as long it has roots in techno.

Here are our first impressions of the pocket-sized drum machine that hooks-up rather nicely to Sonic Charge’s MicroTonic drum synth plugin.

With a few things borrowed from Maschine Studio and its younger sibling, Maschine Jam, the Mk3 feels more of a complete system. Much of this is down to the addition of an audio interface - definitely a welcome move in a world of ever-decreasing ports.

Here we’re discussing ROLI’s smallest MPE device that takes their five-dimensional touch from the Seaboard range and crams it into a palm-sized controller.