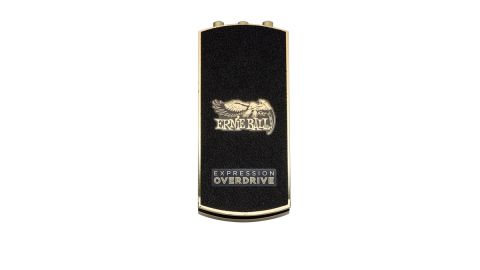 A great pedal, but it comes at a price.

Most of us know Ernie Ball for its strings, while some of us will know that it is the parent company of Music Man guitars.

And others will be aware of its volume pedals, whose rugged design, smooth taper and transparent sound has graced many a guitarist’s rig over the years. One of those volume pedals, the MVP (Most Valuable Pedal), went beyond mere volume adjustment and added a facility whereby it could add an extra 20dB of gain to boost your signal. Now, the company has gone even further and released an actual effects pedal based around a similar chassis.

The Expression Overdrive is quite a departure from standard stompbox because there is no footswitching involved here at all. This is always on in the signal chain and you bring in the effect by pressing down on the pedal treadle. At heel-down there’s zero effect, but at toe-down you get the maximum effect.

The obvious advantage of this is that you have total foot control over just how much effect you bring in: overdrive with one pedal and a combination of delay and reverb with the other.

If you’re partial to a bit of bling, this pedal will appeal with its gold finish. Construction is rock-solid with an aircraft aluminium chassis that is sealed to protect the internal components and a practical non-slip grip mat on top of the treadle.

Treadle resistance isn’t adjustable, but seems to offer just the right amount of resistance while maintaining position wherever you ‘park’ it.

The Expression Overdrive has knobs for Drive, Tone and Boost, and by keeping the Drive knob at minimum but turning the Boost up, you can use it as a useful boost, perhaps with tonal shift, to drive your amp a little further.

Its core function, though, is to deliver increasing amounts of overdrive via foot control. The basic effect is medium gain amp-like overdrive with about the same amount of drive at maximum as a Tube Screamer, albeit with its own voice.

Unlike some drive pedals that roll off a little bottom-end when kicked in, the sound here is always full-bodied - that’s because your full signal is always passing through the buffered pedal, which is not tonally transparent.

In an A/B test, we felt that it had more emphasis in the lower mids than a signal that bypassed it completely, making it sound a little duller than we would have liked.

However, depressing the treadle to add the overdrive brings the Tone knob into play and turning that clockwise should give you adequate top-end for your raunch. If you like the sound, using your foot to add degrees of dirt to a clean amp or fade a dirty amp further into and out of the zone for added emphasis could be a valuable resource.

There’s a lot to admire about the bold design of this pedal, alongside the fact that it offers something quite different from the norm of a simple on/off status; this is a pedal with which you can express yourself and exploit the nuances of sound.

The always-on status won’t be attractive to every player, and - even at the street price of £210 – it is not cheap, but some will feel that it’s a fair price to pay for a new hands-free layer of performance.