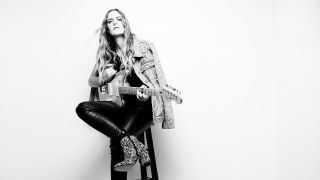 Nashville-based singer songwriter Megan Davies first made a name for herself posting acoustic covers and mash-ups on YouTube - clocking up an astonishing 175 million views and 1.2 million subscribers - before debuting her first originals just over a year ago with the Bad Poetry EP.

A classically-trained guitarist, Davies studied guitar and songwriting at Belmont and has savvily built her career from the ground up, filming her early videos with borrowed gear before a growing following allowed her to diversify into Spotify (from which she earns the bulk of her income), gaining spots on several big playlists in the process. She is walking proof that clever decision-making can enable songwriters to retain full artistic control and support themselves full-time without label backing.

Most recently she debuted the pop-focussed, widescreen tale of high school woes Doesn’t Matter (an acoustic version is available) and uses her platform to showcase collaborations with songwriter friends from Nashville and beyond.

We spoke to Megan about balancing social media management and artistic integrity, growing up in Martin Guitars’ home state and how a collaborative mindset can help songwriters to survive in Nashville.

You grew up in Harrisburg, Pennsylvania before moving to Nashville to study guitar and then songwriter at Belmont. Why Nashville, as opposed to New York, or LA?

“It was actually pretty simple: Nashville was cheaper. I really wanted to go to New York. I’m from Pennsylvania, which is not far from New York at all and I got into the New York University (NYU) music school and that was my dream, but it was just too expensive. The school was too expensive and living in New York City was going to be too expensive.

“Nashville has changed a bit, but when I got there it was very much affordable. That was the biggest part of that decision. LA was also very expensive and far away. Nashville was the easiest and most affordable but I ended up loving it. At first I was like, ‘OK, I’ll work here for a bit and then maybe move to New York later’, but I honestly just fell in love with Nashville and that was it.”

Belmont attracts a lot of talented people. Was it daunting to go and test yourself in that environment?

“It was absolutely daunting. There’s a lot of people who move to Nashville to play music, but it is, I think, a necessary process. Especially coming from a town where, I had friends who were musicians but there weren’t many of us - and even fewer who wanted to pursue it professionally, like I did. So it was absolutely a wake-up call as to how many talented individuals are out there and still to this day I’m reminded that there are many more talented people than I in all facets of music, just by living in Nashville.

“You realised that you couldn’t be competitive like you would in a small town. Like if you have two guitar players, they might size each other up on their skill level, but if you have that perspective in Nashville, it will eat you alive! There are constantly people who are better technically than you in some areas. Instead, you learn to start collaborating with them. So [Belmont] took the competitive, probably immature perspectives and buried them a little bit. Working alongside people and being inspired by them - that’s the perspective that will make you a better musician.”

You’re a classically trained guitarist. How does it manifest itself in your technique?

“I studied classical in high school and then started taking it a bit more seriously in college. However, I had a Brazilian classic teacher in college and he may not have been as strict as some other classic teachers. I loved it. I’ve always been obsessed with fingerstyle and it absolutely carries through into what I do today. I rarely ever play with a pick. I honestly can’t tell you where there’s a pick in my house, currently. I play with the nails on my right hand that I get done every month.

“That same guitar teacher I was telling you about, he had encouraged me to play all of my lead lines with my fingers. I had gotten these fake nails and he was like, ‘You don’t need the pick anymore!’ So I just started adopting, with my index finger and middle finger, playing lead lines like that. Now I never use a pick.”

What guitars do you use now? Do you still have a classical?

“My main guitar is a Martin 000-28, a smaller-bodied guitar. Also, Martin Guitars, just being from Pennsylvania they’re manufactured there and I’ve grown up going to the factory and I’m just inspired by the families and the generations that have worked there. They’re from the same place, in a way, that I’m from, even though they’re a few hours away from me. I grew up idolising them. I always wanted one and I got it my senior year of high school - and that’s the one I play onstage today. It’s a little bit more beat-up than it was then!

“Then I have a dreadnought, an HD-28 Martin that I use in the studio quite a bit when I want a bigger sound. I’ve always preferred the smaller bodies. I’m so much more comfortable with them. That’s pretty much it. I love having just a few guitars that I know really well. I have a classical guitar from college, but I honestly don’t play it very often. It can be fun to play sometimes. The strings just feel better. Especially when you’ve been playing a steel-string for a while, but I say all the time that I need to go back and revisit the classical pieces I was playing, because I used to know them front to back.”

You’ve built an online following into a career as an artist. So much of the advice regarding social media is to listen to your fans and engage with them. How do you align that with artistic aims? Where is the line?

“I get asked a lot of questions about social media and I’m always pretty quick to point out that I haven’t followed many of the rules. I’m absolutely terrible at both reading and responding to comments.

“I’m kind of an introverted individual. When I grew up, I spent time creating things in my room and, honestly, it gives me a lot of anxiety to read comments and especially hear so many opinions about what I’m doing. I recognised pretty quickly that it wasn’t helpful for me as an artist to know what everyone was thinking all the time.

“I read a comment really early on that said something like, ‘All your covers are so slow.’ Then I was making another video and the entire time I was thinking, ‘I’ve got to speed this up!’ Because of that one person on the internet said something about it being slow. I realised, ‘Oh my gosh! This is affecting my creative process.’

“As soon as I realised it was affecting me to that level I knew I had to start taking breaks from it. Especially when I’m working really hard on new material for YouTube, I will stay away from it. Then, when I release something and I’m past that creative stage, that’s when I will go on and I will respond and try to catch up with what people are saying and let them know how much I do appreciate their support. That’s the risk you run when you don’t respond: that people think you may not be appreciative of what’s happening. It’s a tricky little game, I think, for anyone who’s making anything online.”

On the flip side, the route you’ve taken is very empowering for the artist, so who tells you when you’re wrong?

“There’s quite a few! My family is pretty good at telling me. I know everybody says, ‘Oh, your parents love everything you do’, but they’re actually pretty honest with me about what they like and don’t. It’s the same with my sister and my manager, who is also one of my best friends from college. We’ve known each other since before any of the YouTube thing happened to me. We were actually in a bit of a heated discussion last week about a new song that I’m working on - just production and creative differences.

“Especially being in Nashville, I have a lot of singer-songwriter friends - a lot of whom are on my channel from time to time - who’s own artistic tastes I respect. To have them tell me they like something, or like, ‘I think you could beat this chorus’. I take those opinions very seriously.”

What was the last time you had to conquer an element of fear in order to achieve something?

“Oh my gosh. I’m afraid a lot of the time. I had this promotional opportunity with the cast of The Greatest Showman last year. It was Hugh Jackman and Zac Efron and I basically got to sing in front of them and we made a video for my channel. It was literally one of the scariest things I’d ever done. I almost said no to it. Up until the moment it was over, I was so nervous.

“Honestly, though, there’s a lot of things in my career that make me nervous, but I’ve also learned that saying yes to things has resulted in more good things than bad things - and even the bad things, I’ve learned from. So, yeah, I’ve learned to say yes to a lot more opportunities that scare me. My technique, is that I literally don’t think about it until I’m walking onstage and then I don’t have any moment to freak out. Once you’re onstage your adrenaline kicks in and you’re like, ‘OK, this is what I’m doing!’”