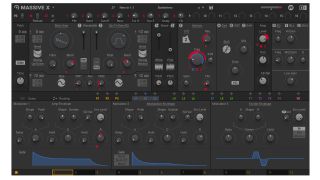 After a lot of hype, Native Instruments' Massive X finally landed in June… but there were some things lacking in the long-awaited supersynth.

Despite very good first impressions, our review noted its small selection of effects, the paucity of visual feedback, and the lack of NKS support among the things that we would have liked remedied.

Native Instruments has, from the start, let everybody know that feature updates and more presets were in the works, and the first significant update has now arrived.

The synth's interface has five new modes: light and dark colour schemes, plus 'flat' versions of all three, which do away with the complex graphics of the knobs. You can access the new skins via the upper-left dropdown menu.

There are more presets, adding 60 "new traditional instrument-inspired presets" to sit alongisde another 100 that were added to Massive X in August, significantly making up ground after the lack of pre-made sounds baked into the synth for its launch.

NI also says that the synth's ADSR envelopes and Switch LFO are now dynamic, although the newly published full manual and quickstart guide for Massive X don't make immediately clear what the implications of these are.

Existing users get Massive X's 1.1 update for free – all you have to do is download the synth and its extra patches via Native Access. You can buy Massive X new for £179 or as part of NI's Komplete 12 bundle.