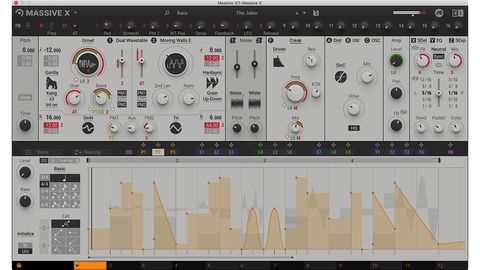 A hugely characterful, immensely powerful synth with a number of issues, some of which feel like the result of a rushed release.

After what feels like forever, the follow-up to the most influential and ubiquitous softsynth ever made is here. Since Massive launched in 2007, playing a key role in the development of bass music, numerous high-profile rivals have equalled and even bettered it, chief among them Xfer Records’ more modernistic Serum. Time for a sequel, then: Massive X - an entirely new synth with its own features and sound, that coexists with the still-available Massive.

Like Massive, Massive X (VST/AU/AAX) is a wavetable synth at heart, but with two oscillators, rather than Massive’s three. Those oscillators boast many more wavetables, though – over 170, including cleaned-up ‘remasters’ of Massive’s best-loved shapes (Crusher, Scrapyard, etc), alongside a ton of new ones – not to mention ten Wavetable Modes (Massive has five), each summarising a different style of playback with its own contextual controls. ART Mode, for example, emulates a kind of filtering, while Gorilla Mode delivers extreme formant-meets-modulation effects.

The main oscillators alone open up a vast palette of raw tones, but a pair of analogue-style Phase Modulation oscillators are also on hand for applying what essentially amounts to FM. A further three ‘analogue’ oscillators can also be added as Insert FX (see below), for dialling in subs and other layers. And there are two noise generators, each housing over 100 looping samples, from regular analogue noise to environmental, mechanical and other sounds.

In the Voice page, up to six stacked voices can be smoothly morphed between unison and a huge array of chords – we can imagine this becoming a popular modulation target.

A sound design playground, Massive X’s audio signal Routing page takes the system of the same name in the original Massive to a whole new level.

The oscillators, Noise generators, Auxiliary PM input, Filter FM, filter, Insert FX, two freely assignable Mod sources and Feedback in and out points are all represented as modules, and connecting them up is as simple as dragging from outputs (on the right of each module) to inputs (on the left), with no limit as to the number of connections made to/from each. At the right-hand end of the signal flow, the master FX adhere to three fixed routings of their own (X>Y>Z; X+Y>Z; X+Y+Z), and each has its own discrete input for concluding your chains, alongside a direct output that bypasses them entirely.

Despite its ease of use, the Routing page gives a great deal of scope for constructing elaborate pathing schemes, mixing up serial and parallel routing in any way you see fit, and facilitating audio-rate filter modulation. The Feedback modules are a highlight, enabling all sorts of fattening trickery to be pulled off through the assignment of multiple modules to FB In, and FB Out to as many destinations as required to make your floor-shaking point.

Moving on to the Filter section, and although, surprisingly, we only get one main filter, as opposed to Massive’s two, there are nine different types to choose from, each offering multiple modes and its own set of controls, and between them presenting a more diverse range of frequency processing options. They all sound absolutely superb, from the squelchy Asimov low-pass and luxurious Blue Monark multimode, through the edgy Creak and formant-evoking Groian, to the extraordinarily effective Comb and three versatile SVF setups. As with the oscillators, if you do need more filtering, you can load any of the three Insert FX with a simple dual filter module.

Back in the day, Massive’s expansive modulation  system was a gamechanger, but Massive X’s smokes it, with up to 17 modulators assignable to pretty much every parameter throughout the synth via drag and drop. Eight of these can each be set to one of four types: Modulation Envelope is a standard shapeable ADSR; Exciter Envelope is a fast one-shot LFO for adding ‘front’ to sounds; Switcher LFO is a conventional LFO with a modulatable rotary selector sweeping through 16 LFO shapes, including ‘Random’ (reminiscent of but nowhere as flexible as the Wobble knob in Sugar Bytes Cyclop); and Random LFO generates chaotic signals with adjustable jitter and noise input. We love the LFOs’ five user-definable synced note values, with which their timings can be precisely switched and modulated.

The four Tracker mod sources let you freely map Pitch- and/or Velocity (Note On and Off)-based modulation, while the Voice Randomizer outputs a random value with each new note (ideal for a bit of analogue fluctuation), and 16 Macros make grouped performance control and automation as easy as ever. Without doubt, however, the stars of the modulation show are the three completely overhauled Performers. Step/curve sequencers on steroids, these serve up an embarrassment of editing riches for designing extended parameter movements. Sequences can be up to eight bars in length, and up to 12 can be held in each Performer for MIDI triggering. It’s brilliant, although copy/paste and storage of sequence presets wouldn’t go amiss.

For all its innovative features and beautifully designed components, Massive X is hindered by quite a few issues. First, you can’t import your own wavetables into the oscillators, or samples into the noise generators. Then there’s the bewildering paucity of visual feedback: modulation isn’t animated at all, and the envelope graphics don’t even move to reflect the knob settings as they do in Massive! And while it’s great that the Insert FX can be used as extra oscillators and filters, with only three of them available, you’ll often have to make tricky choices in that department. We’re not sure three master FX is enough, either, being considerably less than is offered by most competitors. And last but not least, there’s no manual, no standalone version, and - shamefully - no NKS compatibility at launch. Much of this will presumably be addressed via free updates, but we can only review what we’re given, of course.

But to end, rightly, on the positive, Massive X is a fabulous instrument with real personality, that can do things no other synth can. Like its sibling, it specialises in epic, ear-twisting basses and leads, complex digital pads and textures, and mad sequences, but it sounds even bigger, bolder, wilder and more up-front, and grants access to plenty of genuinely new creative avenues. We just wish it had been left in the oven a little bit longer.