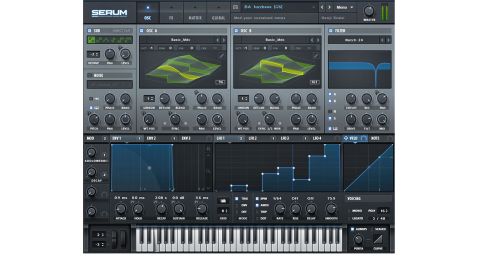 Serum needs to be immediately put at the very top of any synthesist's shopping list. It's insanely powerful and sounds phenomenal.

After three years in development, Xfer Records has at last released its eagerly awaited wavetable synthesiser, and a quick glance at the feature list makes it apparent that Serum (VST/AU/AAX) represents an earnest attempt to produce nothing less than the world's most advanced instrument of its kind.

For starters, fancy software engineering techniques have been employed to create oscillators that produce inaudible amounts of aliasing (the inharmonic artifacts that can occur in digital audio).

The result is that Serum's oscillators sound cleaner and slightly brighter than what we're used to hearing from synth plugins. It's most noticeable when playing high-pitched parts, immediately setting it apart from everything else on the market.

The A and B oscillators are built around the most advanced wavetable engine we've ever seen. You get a 2D waveform view by default, but clicking it reveals a beautiful 3D wavetable display that indicates the current wave cycle, or 'frame'.

Waveforms can be blended statically or dynamically using regular crossfading or harmonic/spectral morphing, the latter mutating from one to the next by adapting the level and phase of individual frequencies.

You can import your own audio to create custom wavetables, but Serum has a full-spec wavetable editor built in to cater for the more hardcore user.

The wavetable editor enables you to manipulate the waveform on a graph display using an assortment of tools that vaguely remind us of the Performer in NI Massive, although with very different results, of course.

Alternatively, you can edit the waveform by adjusting frequencies on an additive graph (similar to that of Camel Audio Alchemy), or process/generate it using preset functions and mathematical formulae.

There are more editing options than we can possibly cover here in full, which is an ongoing theme with Serum - Xfer seems to have thought of everything, or at least made its best effort to.

A third oscillator is on hand in the shape of the sub generator (although it can be transposed up or down by four octaves, so the name is a bit of an understatement), which sports six basic waveforms.

The noise generator is in fact a stereo sample player, pre-loaded with every flavour of noise you're likely to need. These include basic white noise variations as well as output noise sampled from classic hardware synths, and some 'otherworldly' alternatives.

The noise generator can run looped or in one-shot mode, so it's ideal for synthesising percussion instruments - it even comes with a selection of drum kit sounds and a very handy set of kick drum transients; and you can also import your own waves.

The filter module takes its list of types from Xfer Records' LFOtool and so includes a good variety of the usual analogue-style models (low- high- and band-pass, and notch) alongside a variety of combs, flangers and phasers, not to mention ring modulation, formant filter, sample- and-hold and various more esoteric types.

Modulation is handled by an intuitive drag-and-drop system, similar to that of Massive, but with a 32-slot mod matrix letting you see everything in one place, and advanced features such as user-editable curves and an auxiliary 'via' source for each slot.

In terms of modulation sources, there are three AHDSR envelopes and four LFOs shaped using the same refined LFO editor found in LFOtool. The LFOs also feature an envelope mode for building complex, multi-stage envelopes, and four macros are in place for bringing multiple parameters under unified control.

Two Chaos modulation sources can be configured in the global tab, too. These are largely intended to help invoke analogue-style nonlinearities, and they do that well, but you'll find plenty of creative uses for them beyond that.

The whole Serum interface is alive with animated visualisations that make it easy to see what's modulating what - from dots that move on envelopes as they're triggered, to oscillator waveforms that twist and warp as they evolve.

One of the most interesting visualisations is that of the unison function found on Oscillators A and B, which gives a representation of how many voices are stacked (from 2-16), as well as their relative volume levels and detune positions.

The unison feature reminds us of Synapse Audio's Dune 2, and like that synth, Serum offers a selection of five stacking modes, including "Super", which appears to replicate the supersaw unison found on Roland's classic JP-8000.

This sounds huge, but you may find that playing chords with heavy unison really starts to burden your CPU - an issue that Dune 2 doesn't suffer from. Serum's oscillators are dramatically cleaner-sounding, though, and you can take the default 4x oversampling down to 2x if more notes or instances is your priority (or, indeed, go up to 8x if fidelity is your priority).

A shot in the arm

We've only just scratched the surface of Serum here, which has so many deep and advanced features in its locker that we couldn't possibly hope to fully convey everything it can do in just two pages.

This is a must-have instrument for the serious sound designer, although even preset junkies will be thrilled with the 450+ excellent factory patches. We're not being overdramatic when we say that it's quite possibly the most sonically versatile synth we've ever used, and certainly one of the best sounding.