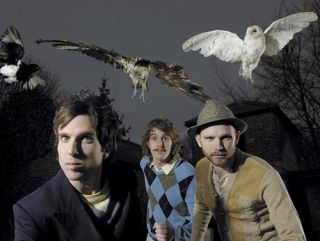 PRESS RELEASE: The Hoosiers frontman Irwin Sparkes says he and the band are looking forward to London's biggest indoor festival, Live Fest. Live Fest is set to take The O2 by storm on 23 July with The Hoosiers amongst some of the hottest acts from the UK music scene performing at the festival.

The Worried About Ray stars are on the bill with a diverse range of acts including Tinchy Stryder, Tempa T and Roll Deep. The Hoosiers singer Irwin Sparkes thinks that's what makes Live Fest so special, "It's one of the most eclectic festival line-ups happening. I think it's really interesting to see where pop music has gone and where it's going. Definitely the guys on the line-up are at the top chart wise, it's a really strong performance bill for lovers of pop I think."

DJ sets from Funeral For A Friend, Kids In Glass Houses,The Libertines' Gary Powell and indie rock actGuillemotsare also on the bill for Live Fest which'll be spread over five venues within the famous London O2. Other acts confirmed are Pegasus Bridge, Missing Andy, Paradise Point, Saturday Night Gym Cluband My Electrik. Tickets for the event can be purchased from the Live Fest website at 2-for-1 for a limited period.

The Hoosiers' debut album 'The Trick to Life' (2007) reached number one in the UK album chart, and Irwin is promising to play all the old favourites from it, "We're going to be playing old and new songs and try to put a smile on everyone's faces and a spring in their step! Festivals are always expected to be outdoors but this is a festival with a twist so it'll be interesting to see what it's going to be like."

With a range of stages and an out-of-this-world chill out space, festival goers can dance away into the early hours, or relax with a massage from the Famous Ibiza Angels whilst catching up on all the best acoustic sets - the possibilities at Live Fest are endless!

For more information and to take advantage of the fantastic 2-for-1 ticket offer for this summer's hottest indoor festival, visit the Live Fest website.