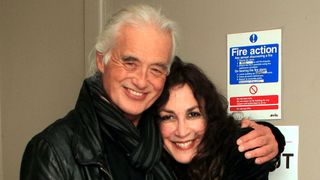 When it comes to the intricacies of playing Jimmy Page's parts in Led Zeppelin, Steph Paynes is a world authority. The founding member of New York all-female tribute band Lez Zeppelin has recorded with Led Zep producer Eddie Kramer and even recreated the legendary band's landmark 1968 debut note for note with the same era gear in 2010.

She knows the Zeppelin catalogue inside out, and Lez Zeppelin even worked with a string quartet for new EP The Island Of Skyros. But when Guitar World asked Paynes the most challenging Page compositions to get to grips with in a new interview, she had no hesitation with her answer.

“The Song Remains The Same can be quite technically challenging," she confirms, "especially for feel. He starts roaming out of the pentatonic scale, and that’s where you really start to separate the girls from the… women [laughs]!

“Since I’ve Been Loving You is another showpiece that’s formidable. You have to play without abandon to get it right. When he launches into the solo, even he pauses for a second, because it’s almost like jumping off a cliff. It needs to be played without being thought about too much, like a lot of blues playing. It’s that kind of Jimi Hendrix-y approach that’s completely expressive.

“The Ocean is another: it swings but it should sound stiff, too - it’s abbreviated, short and sharp. Then there’s all the funky stuff, like Hots On For Nowhere, which is really behind the beat. It’s hard to find players that are as rounded, plus there’s all his Celtic folk stuff."

"I dare you all to play Whole Lotta Love the right way! There are all these weird nuances to it."

You can read more about how Paynes approaches to recreating Page's tone in Lez Zeppelin, meeting Page and even her thoughts on Greta Van Fleet in the full Guitar World interview.