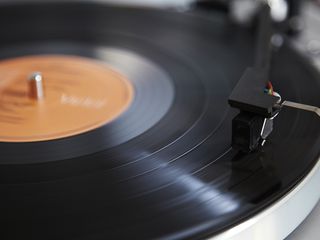 Some sampled loops are instantly recognisable, but there are very few that have shaped entire genres: the 'Amen Break' is most certainly one.

The Winstons were a funk/soul band from Washington DC who are best known for their track ‘Amen, Brother’, which was actually a B-side to their 1969 hit ‘Color Him Father’. However, it was some years later, in the 80s, as digital sampling technology developed, that ‘Amen, Brother’s popularity gathered pace thanks to its drum break.

The piece itself is an instrumental cover and it features an uptempo 16th-note based funk feel with a horn section. The drum groove features groups of two 16th-notes on the bass drum while the right hand plays eighth-notes on the ride and the left plays a ‘2’ and ‘4‘ backbeat along with filling in some 16th-note ghost notes.

Even at 132bpm the pattern already sounds like the seminal drum’n’bass groove it would become. However, it’s the four-bar break, which appears mid-way through the piece that was the target for early DJs and producers.

Now widely known as the ‘Amen Break’, the four-bar break is a drum solo with the first two bars featuring the same groove as appears through most of the piece. However, bars three and four feature a displaced feel in beats three and four, which sees the final backbeat of the bar played an eighth-note later, not dissimilar to the effect used in James Brown’s ‘Cold Sweat'.

The appeal to breakbeat pioneers was the fact that these four bars feature just the drums so sampling allowed the drum part to be lifted out and manipulated, perhaps chopping the pattern up or changing its tempo.

Along with the wonderfully funky playing of drummer Gregory C Coleman, the track’s drum sound is worth noting as it’s of the period, relatively tight and crunchy. It’s also this sonic quality, especially once sped up, which gives the Amen Break its unique sound and has helped make it one of the most widely used and perhaps the most influential eight seconds of drumming ever.