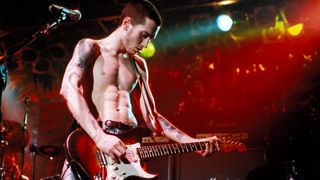 In a surprise move, Red Hot Chili Peppers have announced John Frusciante will rejoin the band after ten years away.

The news marks the end of Josh Klinghoffer's two-album tenure with the band. A statement from the band on their Instagram can be seen below.

Frusciante was an integral part of the band for its two most successful eras between 1988–1992 and after he rejoined for the Californincation album 1998–2009.

Speaking in 2009 of his decision to leave the band, Frusciante said, "I really love the band and what we did. I understand and value that my work with them means a lot to many people, but I have to follow my interests. For me, art has never been something done out of a sense of duty. It is something I do because it is really fun, exciting, and interesting.

"Over the last 12 years, I have changed, as a person and artist, to such a degree that to do further work along the lines I did with the band would be to go against my own nature. There was no choice involved in this decision. I simply have to be what I am, and have to do what I must do."