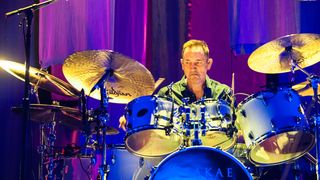 The London Drum Show welcomed a rare UK performance from Jimmy Chamberlin, and so we couldn’t resist prising some wisdom from the Smashing Pumpkins drum ace.

We soon realise that Chamberlin is as masterful in his thoughts on the art of drumming as he is incredible behind the kit.

What was it that first sparked your love of drumming?

“My dad was a clarinet player so we listened to a lot of big band music in the house. My dad was a big fan of Gene Krupa, Cozy Cole, Sonny Greer, Papa Jo and those guys. My dad was born in 1925 so he grew up in the glory days a of swing music. I’m also the youngest of six brothers and sisters. I was born in ’64 so I saw the music change pretty significantly to Beatles type stuff to the ‘70s progressive metal, hard rock and fusion. My brother Paul is also a drummer, so by the time I was six or seven we had a drumset in the house. My first interest in drums was just as a little brother trying to emulate his elder brother. I fell in love with the regiment of practising and whenever my brother wasn’t playing his kit, I was playing his kit.”

What was your introduction into drum education?

“I was introduced to one of my brother’s contemporaries who was Charlie Adams who went on to play with Yanni. He was accomplished as a drummer even at that age which was 18 or 19 and he lived a few streets over from me so at eight years old I started studying with him. He took me through the basics. He sparked a lifelong love of learning within me, that is a blessing that he gave me. After he moved away, I found another teacher and got into more of the swing kind of technique. My final teacher was this guy who was a timpanist who was really into studying music from Trinidad and Brazilian music. I studied with him for maybe a year. By the time I was 15 I was playing out regularly and started gigging.”

How much of an impact did those early lessons have on your style?

“From a technical standpoint it laid a great standpoint before I could articulate what I wanted to articulate later on. Just having a knowledge of the mechanism of practising and how to do it. Also, an idea of how long it takes to get something and master it. That is where a lot of people get it wrong – they don’t give themselves enough time to master something, even something as simple as a paradiddle or a single stroke roll. I continue to work on that stuff today and try to make it better, you never really master it. You might master it to a certain degree, but everyone’s single strokes are different. You need to realise that throughout your life drumming will remain a long arc of practise, completion and some type of resolution. Realising that allows us to continue to learn with patience.”

What attributes do you need to be a great drum teacher?

“It’s a real knowledge of the mechanics. Education is a great way to save people time; that’s what I love to do in my clinics. I try to offer students a way to speed the process up and save them from making some critical errors that I’ve experienced or that I’ve seen other people experience. It’s just storytelling, it’s a passing along of wisdom that you have garnered. Some great players don’t make great teachers and some great teachers aren’t great players. Some teachers feel that they weren’t meant to be players and in themselves they always felt they were more like educators.”

You mentioned your clinics then, do you remember your first ever clinic?

“I remember my second clinic, it was PASIC. I had to play before Peter Erskine [laughs]. I remember he was in the audience and I remember the look on his face when my eyes met his as I was in the middle of my solo. At the beginning clinics are nerve-wracking experiences. There is the feeling that you are under the microscope and there is the pressure of having however many drummers in the audience who are all breaking apart what you’re doing and also your inconsistencies. But once you get your head around that you realise that is part of the learning process as well. It’s about making choices and when you see someone play something correctly or incorrectly it is still information and you are making the choice to assimilate that or not. I feel that with clinics there is always learning to be had.”

How has your approach to clinics changed over the years?

“In the early days of my clinics it was just me playing along to a lot of music and not really having much to say. As I got more comfortable with the mechanism of it I got more into, a lot of guys can play and I think I can demonstrate a good portion of my identity in not too much time. With 40 minutes of music I can show you what I’m about but I also like to spend time talking about ideology, philosophy, what it takes to create an identity behind the instrument, how do we quantify the value of our experience and how we set ourselves up for success. Today, you can try to quantify success by money or how many records someone played on, but in music we should quantify success in terms of how much joy we are getting from something. That is what I try to look for, I look for what my motivation is for doing something and how much it is contributing to my own personal growth. Once you can wrap your head around that and what the parameters look like for ourselves, we can start to participate in successful day-to-day practising and gigs.”

Is that an important factor to stress to young players, that success can be measured in many different ways?

“A lot of guys who look successful on paper are f***ing miserable! There’s a lot of big artists out there who do nothing but complain and then I look at somebody like my brother who plays in for or five different longue bands. He’s 64 and he can’t stop taking about how great his gig was or how he’s learnt something new the night before. I try to make people aware that there are many levels of success. If we are compassionate with ourselves and allow ourselves to define the parameters of what we see as successful then we can move in that direction without outside yardsticks and having to deal with the narcissism of the every day world that we live in. Letting people off the hook is a good way to teach. Letting people know that the destination of music is self expression is important and that the reason that we practise the drums is for us to get what is in our heart out onto the canvas. That should be the only reason that we practise. There’s a lot of people out there who can do it with very few brush strokes. Charlie Watts is one of the most recognisable drummers out there and he does it with very few brush strokes. Then you have someone like Vinnie who obviously articulates in a very different manner, but the destination is the same. They both have feelings they need to articulate and get out onto the drumset, they just have a different mechanism. That doesn’t mean that one is right and one is wrong or that one is better than the other. It’s all self expression.”

Do you see education as an ongoing experience, even at the stage of your career that you’re now at?

“Being with the Pumpkins and having been with Yamaha through the days of Vinnie, Peter, JR and Weckl and all of those guys, I was really fortunate to talk to those guys. There are so many drummers I would love to be able to sit with and talk to for a year. I would love to compartmentalise 20 years of my life and just binge on drum lessons, but I have two kids and a business so my time very much gets compressed. I love to sit down with young drummers and see what they’re on about. It is always a learning experience. The last time I did the London Drum Show it was with Gregg Bissonette, Terry Bozzio, Tomas Lang; it was amazing. I remember doing that and being completely nervous about playing with those guys. What was amazing about the experience, beyond meeting Bill Bruford which was another level of, ‘Holy ***!’, but the compassion that those guys showed for each other was amazing. Everybody in that circle knew that only they could do what they did. We all took a turn playing Bozzio’s drumset and we all failed miserably. We all did our thing and at no point was there any competition, everyone was cheerleading for all the other drummers and that is what creates the best teaching environment, when there’s preconceived notions, there’s no self-consciousness and it just becomes a free expression of identity. To have an environment like that where everybody has your back, and for the crowd too, that is a great teaching moment.”