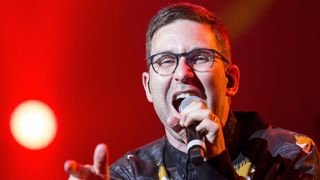 Jamie Lidell has always been a hard man to pin down. His varied career has seen him making numerous stylistic shifts and producing everything from experimental electronica to pop-tinged soul, while carving out a reputation as a compelling live performer.

His latest release, Extended Beginnings EP, picks up where last year’s Building A Beginning album left off, and will be available from Monday 18 September.

Jamie is also launching a podcast, Hanging out with Audiophiles (available via Apple Music), in which he explores the music making process by chatting to other artists and producers. Pat Carney of the Black Keys features in episode 1, and future guests will include A-Trak, Chromeo, Paul Epworth and Dave Stewart. He’ll also be discussing his own creative strategies.

What better time, then, for Jamie to ponder his musical journey and tell us the five lessons he’s learned along the way...

1. Stay organised and think of your future self

“Dull as it is, it’s basically a top tip in my opinion. If you can find sounds you can use them. One thing that bites me in the ass a lot is not having a proper collection of the bounced audio for a song after it’s done.

“It’s a real pain but, if you can do a bounce of a song with all the FX and levels printed, you can literally always open it.

“Think of your future self. Will you have that weird distortion plugin in two years? Will it even work in Ableton 10? If your songs are archived like a multitrack tape you’ll be so happy, and it’s perfect for getting remixes of course.

“It’s the last thing you usually want to do after finishing a track, but the extra couple of hours are well worth it.”

2. Walk away more! Come back, but walk away!

“I’m still learning this. When I work, I can go hours without food or often perspective. I fixate on tiny details and I could do so much more if I just stepped away from the computer and took a 10-minute break.

“Literally leave the room. Do something wildly different and you’ll hopefully return with a tiny dose of fresh. So long as you don’t do crack in the 10 mins of course. In general, I think maybe crack is not the solution.”

3. Listen to other mixes whilst mixing

“There’s a few bits of software like Magic AB that let you listen to other songs (and old mixes of the same song) while you are at your DAW. I think it’s wise to stay on track. It’s easy to turn up the volume and lose sense of treble for example. Not to go on about coke, but that’s why those ‘80s tracks are so bright. They’d write their name in blow and snort it. Push the highs to 11 and there you go. Crispy as a mother.

“So yeah; maybe not a blow hole and not a cracky pipe. Just find tracks you know and love the mixes of (a good exercise in itself) and have them always there to cross reference. It’s painful sometimes because they sound so good and your mix might be poo, but if you turn theirs down 4dB you’ll probably feel much better (for a while).”

4. Find a way to solo the bass end

“There’s an amazing amount of dirge that can roll around in the low end of a track. What needs to be there? If you have a multi-band compressor or just an EQ that’s set just as a low-pass filter, slap it on the master bus and take a listen. What kind of extra business is in with your business?

"Find it and remove it! A lot of times mics can generate a lot of low end so be careful to cut the lows when you don’t need that stuff or the low-end energy is gonna be eaten. It’s war in the low end...”

5. Songs are everything, really

“To be honest mixing is just OK. I mean it’s important and all, but the song and the parts - they are really 99.9% of the thing. The good thing. How many of your fave songs are about the mix? I bet you love loads of tracks that are mixed like shit (probably on crack or coke!)

“Sly Stone made funk. The hiss is immense on There’s a Riot Goin’ On. It’s in the song, though. It’s the feel that is killing you. That’s what’s giving you the stink face. Don’t fake the funk in the mix. It’s not gonna help! Only mix a good song. Destroy the rest!”