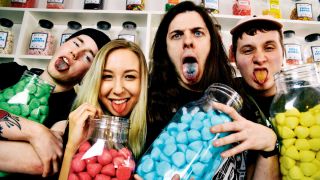 The Stroud noiseniks are currently gnashing their way into the hearts and minds of the UK’s rock scene have enjoyed some impressive support slots to the likes of Refused, Tonight Alive, Lower Than Atlantis and Frank Carter and the Rattlesnakes, and with the release of their Be Nice EP, their destiny is surely  to top bills the world over.

Oli Holbrook is the man laying down the punky but skilled beats behind vocalist/bassist Becky Blomfield’s snarling vocals, and more hooks and riffs than you can shake a  stick at. Check out the grunge-y power pop of  ‘Owning Your Okayness’ to see just what the  tooth fairy is so afraid of.

So Oli, what was your introduction to drumming?

“My parents bought me a tiny bongo for Christmas when I was six and I played it all day until it broke,  they then eventually decided to buy me a kit on which  I began to learn as many Green Day and Slipknot  songs as I could before I eventually started musical education and really started to zone in on rudiments and technique.”

“Growing up, drummers such as Tre Cool and Joey Jordison blew my mind with how frantically and fast they could play, however as I grew older drummers such as Eric Moore, Chris Coleman and Travis Barker began to capture my attention with how they managed to combine all aspects of drums together and apply them to all situations and genres.”

Which Milk Teeth song perfectly captures your sound and style?

“I would have to say two songs: Owning Your Okayness, which is our latest single, it’s a lot slower paced and really gave me a chance to groove down and write some interesting fills. However, Brain Food off our debut album Vile Child is faster paced and is frantic, allowing me to do what I do best!”

“Practise as many rudiments as much as you can and really build the best foundation you can. Never limit your achievement, nothing is impossible and you’re never too good to stop learning.”

“I use TRX cymbals using BRTs and LTDs, they’re super-solid cymbals and give me that extra kick on bigger stages. I play a Mapex Meridian Birch kit, which I’ve had for six years and is still in great condition. It has delivered so much punch and durability over extensive years of touring and shows. And, finally, I use a Pearl Demonator pedal, which has been incredibly durable and delivers so much power.”

“My Evans Hybrid snare head, it delivers so much attack live and is so durable it really cuts through on noisier stages and can hold on for more shows. For the cost and shelf life of this head it’s really good value for money and simply sounds amazing.”

“My mum bought me an unbranded old kit for Christmas when I was eight and I battered it for years until we moved to a busier street meaning I couldn’t play an acoustic. But despite it lacking in quality compared to other kits I still miss it. Then I moved on to owning my Mapex when I needed something much more durable for touring.”

How do you approach playing live with Milk Teeth?

“Warming up is so important to me, because our live shows are very physical it can put massive strain on your body, so stretching using a practice pad and small workouts are key for me. However, reaching a calm mental state is also key to being comfortable and also being able to deliver a performance. Listening to music on headphones and going into my own world half an hour before a show is how I reach that state.”

“Expressing yourself is so important, playing music for me is like therapy and I feel like I lose any sort of care when I’m behind my kit, so everything comes out within that time. Combining this and discipline are very hard but when you find the right balance this what makes for a tight set but also a memorable one.”

“I work very tightly with the bass most of the time and try to create a solid foundation for guitars to work off of, however sometimes certain guitar licks do inspire fills and grooves. Certain chords make you want to move your groove onto different areas of the kit and really try to lock in and create something that really flows and sounds interesting.”

“Playing Reading Festival with my mum side-stage. She has always supported and pushed me in my career and to be able to show her the journey from my first battered kit to playing a festival I dreamt about since I was a kid, was incredibly special to me.”