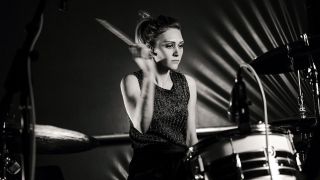 Bad Sounds don’t make bad sounds at all – in fact, they pride themselves on making great sounds, recreating the sounds of the ’60s and ’70s and then vibing them up with old-school hip-hop sampling techniques. And

the results speak for themselves; just check out ‘Avalanche’, ‘Meat On My Bones’ and ‘Zacharia’ to see why these Bath-based indie-pop groovers are getting plenty of fans, including Radio 1’s Annie Mac, for whom they recently did a session. Olivia Dimery is behind the (vintage Premier) kit, providing great pocket grooves and Purdie-inspired shuffles.

“I grew up around music: my grandad was a jazz drummer in the 1950s/’60s, he taught me how to play paradiddles and double stroke rolls – ‘mama dadas’, as he called them – on a small drum pad that he gave me along with some old percussion instruments.

"He was very proud that one of his grandchildren took on his love of drumming and talent. My dad has been playing in bands ever since I can remember. He’s a guitarist and singer, and I grew up listening to him play rock music. My style is more inspired by rock music than jazz. I think music is in my blood.”

How did you come to hook up with Bad Sounds?

“I taught drums in a music shop that [bandmates] Ewan and Callum work in. Before they met me, they’d decided to put a band together and they wanted a girl drummer.

"I think the moment they decided to ask me to be in the band was when Ewan heard me teaching one of my students a Grade 1 piece, and as he walked past he heard me say, ‘It’s just kinda like a jungle rhythm, make it sound like you’re in the jungle’, which made him laugh. He knew from then I was the one for them.”

The band record with vintage drums to get the authentic sounds that were going to be sampled – what drums and what kinds of mic set-ups did you use for recording, and are you an expert in old drum gear and recording techniques yourself?

“None of us are experts at all in that gear, but we are learning as we go and picking up new tricks. The whole reason we do it is because we’re really influenced by hip-hop production and using ’60s and ’70s drum breaks is obviously a massive part of that.

"We weren’t in a position to clear samples, so we tried to learn how to make drum recordings that sounded like classic breakbeats. We did some research (mainly Beatles, Motown, Daptone and Hi Records drum miking techniques) and, took a few chances on some old microphones on eBay.

“We’re really lucky because our friend Tristan runs a vintage drum restoration business called Drumattic just down the road from us in Radstock and he’s given us loads of good advice on what to use for which era, but he also lets us just go to his place and experiment with a huge range of amazing-sounding vintage drums – which is obviously ideal for trying to record vintage-sounding drums!

“We always record drums with two microphones, a vintage ribbon mic placed roughly between the kick and the snare, facing the drummer, and a decent condenser for a room mic. We spend a lot of time getting the attack and release right on the compressor to get the groove sounding as good as possible.”

What do you think real drums bring to the music that samples can’t?

“The feel, groove and dynamics are more authentic on a real kit. Programmed drums are good for the hip-hop side of our sound, but authentic kits are good for our ’70s-style groove.

"I think it’s cool playing around with both for the recordings, as it adds more layers and more range. However, I play on an acoustic kit live and replicate some of the sampled sounds.”

The band are going for a real ’70s feel.  What drummers did you try and channel from those days?

“I always channel Ringo when I play! But I think there is a little Keith Moon in me when I improvise some of the fills, too. Bernard Purdie is a drummer Ewan, Callum and I have been influenced by to get that real groove. He’s so smooth, and I love watching his tutorials online.”

What gear do you use yourself?

“My grandad used to play a white Premier kit, so I was set on finding my own: I have an ’80s Premier kit which I got from our friend Tristan at Drumattic. It’s white with blue stripes, and I like to think of it as my toothpaste kit. He restored this kit, making it sound ‘tasty’, in his own words.

"I use a Ludwig snare – I like my snare to be tuned quite high and tight. We’ve recently purchased an Istanbul ride and hi-hat for my kit which have a nice warm sound. I have a Sabian crash, which is really sharp and cuts through nicely, for the POW! moments.”

“I was approached by a group of girls at one of our gigs last year who had told me that I have influenced them by being a female drummer. I feel proud to influence more female drummers/musicians into the music industry. Woo, girl power!”

How do you approach playing live with Bad Sounds?

“I try to take one gig at a time and not think too far in advance. I like to stay calm and enjoy myself when performing so that I don’t get nervous, this helps me to focus more and stay in control. However I take a moment in-between the songs in the set to look around at the crowd and laugh with my bandmates and enjoy the moment.”