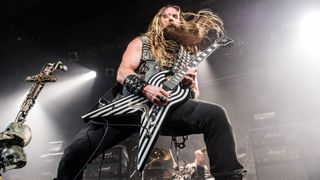 Zakk, doing what he does best onstage in 2014 (Image credit: Amy Harris/Corbis)

I got my first real six-string

"My first good guitar was a Pelham Blue Firebrand SG, and then I sold that to get my first Les Paul. That thing's in the Rock & Roll Hall of Fame. Obviously, I'm not, but the guitar is. I think they're trying to tell me something! It's just me and Deep Purple left!

"I started playing guitar when I was eight, wanting to learn Elton John songs. I didn't dedicate myself to lessons. The teacher told my parents that I just wasn't ready. When I hit 14, that's when I saw my guitar teacher playing in front of me, Hendrix, Van Halen, Sabbath, Ozzy, Zeppelin, it looked like the most interesting thing in the world to me. The fretboard was a world of possibilities. From that day on, I lost myself to guitar."

"Obviously, because Jimmy Page played a Les Paul and then Randy [Rhodes] as well, I loved the Les Paul Custom. I loved the Standard as well, but I'm more of a Custom guy, whereas Slash loves his Standards. It's the same with Strat and Tele guys. You don't want to get those two into debate!" Get back to where you once belonged

"I actually have most of my teenage guitars back. That's pretty cool. I made contact with the guys that had them and hooked them up with another guitar or something and traded for my old guitars. They're all in the Black Vatican [Zakk's studio]."

I want you to show me the way

"You've got Jimmy Page, Tony Iommi, Frank Marino, John McLaughlin, Al Di Meola, they're my big five guys. A sit down with Saint Rhoads would be nice, but we'll save that for the trip up to God's Tavern."

Listen, do you want to know a secret?

"Just relax. Don't get worked up. If rehearsals were good then just do that on stage. Don't try and do anything more and psych yourself out, especially if it's your first gig. If you tell me we're on in 10 minutes I'll just noodle a little bit and go do it."

"I'm happy with the whole ride when it comes to recordings I've done. The solo to No More Tears, I wanted to double track it and do some other things, and the guys told me to let it go. We took a break, went to the bar and left it. I really wanted to double it, and that solo ended up being one of my most popular solos."

"Worst would have to be when gear goes down. Those are ones you remember and laugh it off. You have to just keep ploughing ahead, that's all you can do. The most special gig was meeting Ozzy and playing my first show with him at Wormwood Scrubs Prison and then doing the Moscow Peace Festival in front of 100,000 people.

"I remember going from that to getting in the van, doing 20,000 miles on the [Zakk's first solo album] Book Of Shadows tour, playing at a Sudsy Malone's, and in this bar you had the bar to the left and the stage in the back, where there were washing machines so people could do their wash in the bar.

"You had the bartender, a guy shooting heroin, a guy trying to resuscitate the guy that had done heroin, a guy doing his laundry and then us on stage. At that point, I knew I had arrived."

"The brown M&Ms are the most important item on our tour rider. We have all the ones that Van Halendidn't want."