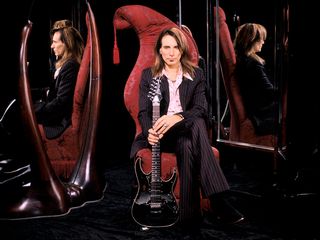 According to master guitarist Steve Vai, the artists on his record label - Favored Nations - were signed because they have "attained the highest performance level on their chosen instruments." Like his roster, Vai is a perfectionist, and an extremely busy man…

He's been a regular headliner on Joe Satriani's G3 Tour, proud namesake of an array of signature guitar gear (including the Ibanez Jemini Distortion pedal) and was recently featured in MusicRadar's 101 facts you never knew about music. He's a very keen apiarist, didn't you know?

Oh, and he's a none-too-shabby actor, too. Remember Crossroads? Or more recently, check him out as Hank Williams in Crazy.

We've got Steve Vai popping in for an interview THIS WEEK!

So this is your last chance to ask a question. Simply add one to the comments below (you'll have to be registered and logged in to do so) and we'll pick the best. Good luck!