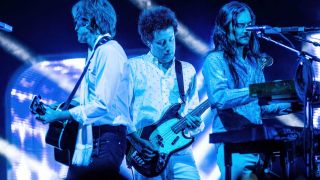 Launched at Summer NAMM earlier this year as one of several new signature models from Fender, the new Justin Meldal-Johnsen Road Worn Mustang Bass becomes officially available on the market this month.

Here, the session musician and super-producer, whose credits include 20 years of service in Beck’s band touring - as well as appearing on releases by artists as far and wide as Air, M83, Pink, Linkin Park, The Black Eyed Peas, Macy Gray, Kid Rock, Garbage and Tori Amos to name but a few - explains how the collaboration came about…

What does this new signature model mean to you?

“The thing about the new Road Worn Mustang is that it was designed to mimic a bass I found to be the most personal instrument I’ve ever owned: my ‘66 Mustang in Daphne Blue. I have a few basses like that which I’ll never get rid of, they will always be a part of me… But when I got that bass about 15 years back, which isn’t even that long ago, I found it to be the one.

“It’s an incredibly meaningful instrument because it allows you to speak through it and very clearly. How it does that has always been a curiosity for me. It was never really part of the NIN sonic presentation - Mustang basses weren’t really right for that gig. But playing with Beck for the last 22 years is how I figured out Mustangs can do so much.”

“This all happened in parallel with me making more records in the studio! It was like an awakening for me, because I realised with modern music - which has a dense production with a lot of sound design and synth presentation - I was always struggling to find a focused place for the bass guitar to inhabit without getting lost.

“I wanted it to have note value, with all punch and clarity, certain characteristics coming through. I used to do that incessantly by over-EQing things or over-processing things. It became apparent that I need to do something different - so I would start playing with an old Mustang.

“Somewhere around making [M83's] Hurry Up, We're Dreaming around 2010, I just realised it worked for so much shit. It would always cut through any wall of sound - coming out right at the front with this really woody sound.”

“I used it a lot with Beck and it started becoming requested more and more in my sessions. I realised that it was a big part of my sound. It was a big part of me. It fit in the context of modern music surprisingly well, more than I expected! So people would hit me up asking about what bass it was or where to find one.”

Where did the idea for a new Mustang signature come from?

“Fender wanted to create a Mustang with a vintage character, which was missing from their line-up, and they felt I had become more known as a Mustang guy, so would be the right person to represent it. We went down this path and it ended up being this really fun thing.

“The prototype came out great and we realised it was something that could really fill a void for people… An instrument with a worn-in feel, very vintage-y with some nice body relic’ing for that bespoke character that’s so in-vogue these days, with cool colours that pop and at an affordable price. So we made it!

“The purpose of it for me was making something really functional for bass players that was still affordable… the vintage feel without the vintage price tag. That was the goal in mind!”

And being such a schooled session player, you must depend on versatility from your main instrument…

“I’d hate to ducktail all of my sound to the Mustang, but that’s part of why it’s such a great instrument to me. It’s like a P-Bass but in a different way in that you can use it in all sorts of musical genres.

“You can mimic a hollowbody or an upright, you can play punky stuff, you can sound like [American punk hero] Richard Hell, you can sound like [Talking Heads founding bassist] Tina Weymouth… it’s that broad. Which is why I feel it’s a great project for me and Fender - it represents a lot of my musical ideals. It’s not limited, it’s for a lot of people rather than a few people.”

Is there anything else new in your main rig?

“Other than the new signature bass series, there’s nothing new really… it’s all pretty vintage with me! My touring rig is a 2000 Sunn with a 2X15 cabinet with old JBLs in it. Next to that is a Ampeg Blueline 1970 SVT rig and beside that is an Acoustic 370 with a 2x15.

“I’m a real old-school amp lover. I’m less precious about effects - I’ve dipped pretty heavily in some of the new shit like Old Blood, Alexander, JHS, that kinda stuff. I’m definitely a big EarthQuaker aficionado. It’s mainly weird one-off shit, stuff people have handed me that’s completely random. There’s another pedal maker that I love called Mantic. I love their stuff and use it all quite frequently.”

“I have no prejudices over what makes a pedal good for bass or guitar or keys… I don’t really care, I just use it. I always think how I can apply things in different ways, they’re all kept in an RJM high-tech switching rack that has five drawers. The basses and the amps are old-school, while the pedals are more experimental and tech-y.”