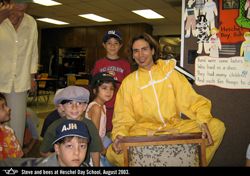 Steve Vai gets a buzz

Think you know a lot about music trivia? So did we, until we started researching our New Year trivia blowout where you'll find more useless (and some useful!) musical facts than you thought ever existed.

MusicRadar's 101 facts… comes in four parts. Today is part 2, facts 26-50, where you'll learn about Elvis's startling weight gain, the hobby that keeps Steve Vai buzzing, why Jay-Z doesn't need a pen any more. And other 'stuff'. How weird are rock stars?

27. Neptunes producer Pharrell Williams is huge fan of the science fiction series Star Trek. Hence his consistent use of the Vulcan salute to signify his label name, Star Trak.

29. Andy White, the drummer who played on the definitive version of The Beatles' Love Me Do, never earned more than his original session fee of £7 from the track.

30. Steve Vai is an expert beekeeper and occasionally lectures schoolchildren on the joys of apiary.

31. Since their inception, Guns N' Roses have had 21 full-time band members… and counting. Could you pick them all out in a police line-up?

33. Acclaimed UK cook and author Delia Smith baked the cake on the cover of The Rolling Stones' 1969 masterpiece Let It Bleed.

34. Flowers In The Rain by The Move was the first record ever played on BBC Radio 1 in the UK.

36. The built-in MIDI ports on the Atari ST were only included because they were suggested by Atari boss Jack Tramiel's son when the computer was being designed.

37. Jay-Z hasn't written any of his lyrics down for more than a decade.

38. James Joseph Brown Jr, who died on Christmas Day 2006, was meant to be named after his father Joe but a mix-up on the birth certificate meant Joseph became his middle name. Once he reached adulthood, Brown legally removed the 'Jr' despite (or because of…) Junior/Little Junior being his nickname as a boy.

40. Timbaland has claimed to have the sounds from every drum machine ever made.

41. Tom Morello's father, Ngethe Njoroge, a Kenyan, was the country's first ambassador to the United Nations.

42. Chic's Le Freak was originally called Fuck Off. These were the words that were sung as the main hook, but they were changed to 'Freak out' before the song was recorded.

43. One of the rumoured reasons behind Prince's decision to pull The Black Album just before its release in 1987 is that he had a bad experience on Ecstasy.

45. Steven Van Zandt (Bruce Springsteen, Silvio Dante in The Sopranos) wears a bandana to cover permanent loss of hair from a car accident, where he hit a windscreen with his head.

46. The Chemical Brothers were originally called The Dust Brothers, but had to change their moniker after the US production duo of the same name threatened legal action.

47. One of the samplers in Propellerhead's Reason is called the NN-19. This is in tribute to Paul Hardcastle's 19, his 1985 hit that features stuttered samples as its name hook.

48. Diana Ross and Marvin Gaye recorded most of the vocal parts for their 1973 duets album in separate studios. A pregnant Ross was worried that Gaye's marijuana smoking would damage the health of her unborn child.

49. The famous synth motif from Close Encounters Of The Third Kind was played on an ARP 2500.

50. Red Hot Chili Pepper John Frusciante once planned to audition for Frank Zappa - until he found out about Zappa's strict 'no-drugs' rule for his band.