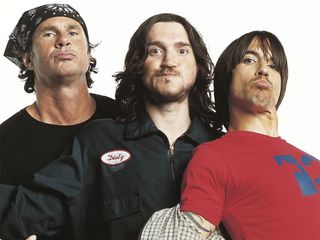 John Frusciante joined the Red Hot Chili Peppers in 1989 at the tender age of 18, but quit after the massive success of the Chili's Blood Sugar Sex Magik album. After a handful of solo recordings and a stint in a drug rehabilitation centre, Frusciante rejoined the band in 1999.

Fellow RHCP member and previous podcast star Chad Smith is often cited as one of the greatest drummers of modern times, and John Frusciante can claim a similar title for his guitar skills. That's an impressive double-award for one band.

Frusciante is currently holed-up putting the finishing touches to his latest album - The Empyrean, recorded with bassist Flea and ex-Smith Johnny Marr. Fortunately for us he's taking time out to answer a few questions later this week.

To ask John Frusciante a question, simply add one to the comments below (you'll have to be registered and logged in to do so). We'll pick the best and ask them during the interview.

MusicRadar has now spoken to John Frusciante - thanks for all the questions! We'll leave this live, though, so you can read what other Frusciante fans want to know.

This podcast will be on MusicRadar in early 2009.