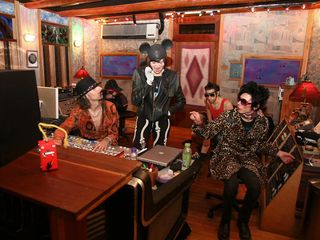 YYYs in the studio

Yeah Yeah Yeahs are the latest band to rush-release an album after it was leaked online. The trio's third LP It's Blitz now gets a digital release on 9 March (a day later in the US) - weeks earlier than originally planned.

"The cat's out of the bag after IT'S BLITZ! escaped from our clutches into the big bad world last week," blog the band. "Why should some have and some have-not?"

"YYYs have been brimming with nervous excitement in anticipation of releasing this record to the world! Leaks are NO FUN but it's out of our hands."

We're sure U2 would agree with you on the "NO FUN" part. Oh, and Oasis, Metallica, GN'R, Eminem…

If you still enjoy holding something 'real', physical copies of It's Blitz! will be available on 6 April, or 31 March in the US.