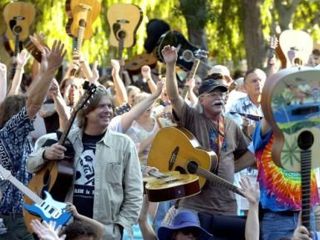 No brown acid here...or is there?

The world has gone world record crazy. Or something. A 14-year-old kid plays the guitar for days on end. A man won't stop drumming. A group of Hungarian musicians jam for weeks or a month - who can do the math? And now even Woodstock dude himself Country Joe McDonald has gotten into the act.

On Tuesday, the peace-and-love legend led 2,052 guitarists in a record-breaking performance of Woody Guthrie's This Land Is Your Land in a Concord, California park on Tuesday. Entire families showed up to strum and sing along to the six-minute rendition of the tune. Here's the video.

It will take Guinness World Records officials at least a month to certify that they broke the previous record for a guitar ensemble playing in unison, which was set almost exactly a year ago by 1,802 people in Leinfelden-Echterdingen Germany, who collaborated on a version of Smoke On The Water.

All we can say is, what next?