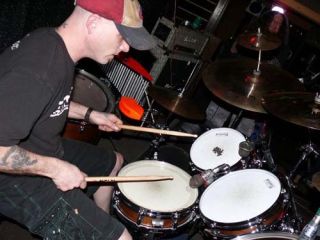 Link: Unavailable to comment due to lack of sleep (Image credit: Ohio.com)

Guinness have not yet confirmed the official time but bystanders claim the event finished at 2:45am local time. Apparantly Logen was keen to drum on for another 12 hours making it four consecutive days of play, but unfortunately tiredness (and Repetive Strain Injury, probably) got the better of him.

You can take a look at Link's playlist on his MySpace page - it's a rock drummers' dream.