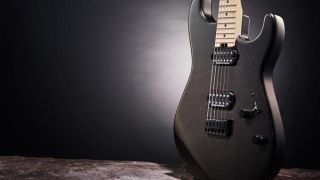 Total Guitar has lined up an extra special competition for readers this month - not only can you win a top notch workhorse guitar worth over £700, but it's been used in the field by a real-life rock star!

Yes, we've teamed up with Letlive and Charvel to offer one lucky reader the chance to win guitarist Jeff Sahyoun's very own Pro Mod San Dimas HH hardtail in Metallic Black, as played and signed by Jeff himself!

The guitar comes tricked out with Seymour Duncan JB/59 pickups in the bridge and neck respectively, a coil-split circuit and moody black Charvel hardware in the shape of the HT6 hardtail bridge and sealed die-cast tuners.

To be in with a shot of winning the guitar, simply head over to the competition page and answer the question correctly!

Letlive will be supporting Pierce The Veil at the following UK and Ireland tour dates: