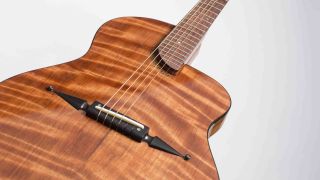 Californian guitar maker Rick Turner is well known as the craftsman behind Lindsey Buckingham's Model 1 solidbody electric, which is indelibly associated with Buckingham's Fleetwood Mac guitar sound. Built to the same exacting standards, the RS-6 is part of Rick's Renaissance series of electro-acoustic guitars, handmade in Santa Cruz, California, which feature a thinline Mahogany back and sides with a curly redwood top and a mahogany centre block to assist in reducing feedback.

The RS-6, which is also played by Lindsey Buckingham, is a sophisticated, versatile instrument for both the stage and studio thanks to its shallow, comfortable body design, Turner Piezo bridge pickup and 18V D-TAR preamp.

To be in with a chance of winning this superb example of the guitar-maker's craft, you'll need to head on over to the online competition entry page hosted by Fulham-based boutique guitar store The North American Guitar, where you'll find full conditions for entry and terms and conditions.