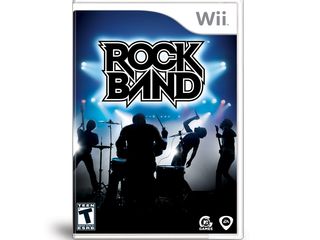 Even better than the real thing?

It's hard to form a make-believe rock band when all you've got are Xbox 360, PlayStation 2 and PlayStation 3 game systems. If only you could form your mime group on your Wii system.

Faster than you can say "karaoke," Harmonix and MTV Games, along with distribution partner Electronic Arts, Inc., have announced plans to release the award-winning music video game Rock Band on the Wii home video game system from Nintendo in the U.S. and Canada on June 22, 2008, with the rest of civilization sure to follow.

Rock Band for Wii will be released as a Special Edition bundle including the software, drums, microphone and a wireless guitar. Stand-alone instruments will also be available on June 22 for people who want to build their band one instrument at a time or want to play the drum versus drum game mode. The game will feature 63 songs including five bonus songs for Wii gamers.

Featuring the most master recordings of any music game ever by the world's biggest rock artists, Rock Band includes tracks that span every genre of rock ranging from alternative and classic rock to heavy metal and punk. Rock Band has garnered over 40 awards this year including Game Critics Award: Best of Show E3 2007 and three awards at The 11th Annual Interactive Achievement Awards including Outstanding Innovation in Gaming, Family Game of the Year, and Outstanding Achievement in Soundtrack.

Rock Band for Wii will be available for the list price of $169.00 US. For more information, visit the official Harmonix Music Systems website or the official Rock Band website.