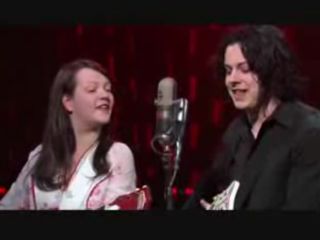 The White Stripes performed together for the first time in nearly two years last Friday night as the final musical guests on the last episode of Late Night With Conan O'Brien.

The duo, both with guitars in hand, Jack in black and Meg in a pink-and-white dress, stood side by side and played an intimate, stripped-down and ultimately moving version of We're Going To Be Friends from their 2001 album, White Blood Cells. See the video below.

"When we were trying to decide what musical guest to feature on our last show after so many years, there was one band that was always at the top of my list," O'Brien told the audience. "I wasn't sure this could happen…Please welcome our good friends for many years, the White Stripes."

O'Brien has admitted that We're Going To Be Friends is high on his list of favorite White Stripes songs. The band has a long history with Conan, which includes a week-long residency on Late Night in 2005.

What makes this performance notable is it's the first time the Stripes have played together since Meg's 'acute anxiety' upended their US and UK tour plans during the summer of 2007. Jack White has busied himself with a variety of projects since then, but according to reports, the duo have started work on their seventh album.

To which we say, Welcome Back!