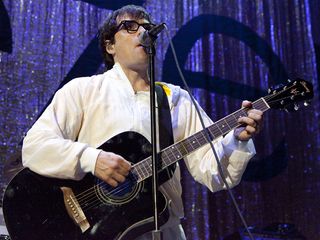 Weezer's Rivers Cuomo says fans of Pinkerton, the group's beloved second album, will have reason to rejoice soon: a deluxe CD is in the works.

Cuomo was responding to a question put to him by MusicRadar reader The Rocker, who asked if Weezer were planning on putting out a box set of unreleased material.

"That's a good question," Cuomo said, "and the answer is yes. After Raditude [the band's upcoming album] comes out, the next thing will be something called Odds & Ends. It's going to be a collection of all the Weezer songs that never made the records for one reason or another.

"Also, we're going to be putting out a deluxe edition of Pinkerton, with some rarities added on. And probably a greatest hits CD, with even more bonus tracks. Lots of cool stuff to look forward to."

Another reader, Rocker59, asked if it was true that Cuomo was in a Metallica band at one time, to which he said, "Yeah. I was in several tribute bands before Weezer. The Metallica tribute band, a KISS tribute band...Probably the most interesting one was my Yngwie Malmsteen tribute band."

Back in the day, Swedish guitar virtuoso Malmsteen was as much known for swinging his axe around his neck (and catching it!) as his fleet-fingered musical skills.

"I could never really master the guitar-swinging stunt," Cuomo said, laughing. "But I did those super-hot leads pretty well - at least, I think I did. It's fun to be a rock star but not to have to be yourself sometimes."

Tomorrow, Cuomo kicks off our brand-new interview series based on reader questions and weighs in on the most important topic of all: The Beatles or The Stones?