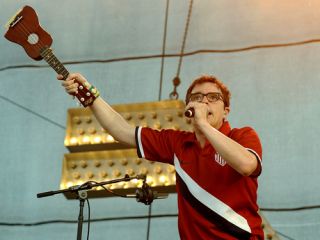 Weezer's Rivers Cuomo says that turning 40 earlier this year, along with the band's "growing canon of material" both played into his decision to go retrospective with the continuation of his Alone series of recordings, next month's long-waited Pinkerton Deluxe Edition, a compilation called Death To False Metal and the upcoming Memories Tour.

"It does feel as we get older we have this growing canon of material, and it's part of our lives," Cuomo said during a recent interview. "There's no getting away from it. It's hard to add to it because it just becomes more impressive as time goes on...and I guess naturally we find that we spend more of our time and energy doing retrospective projects. Luckily, I'm a very open-minded artist, and I like to go with the flow and really go with what our audience wants to hear."

And what the audience wants to hear, in increasing numbers, is Weezer's second album, Pinkerton, which the band will dish out in its entirety on their Memories Tour. The run begins 26 November in Universal City, California, and will feature two-night residencies during which Cuomo and co will play the first Weezer record (aka the Blue album) and Pinkerton from beginning to end, along with other material.

"Our core audience is always clamoring for more Pinkerton and more Blue album," Cuomo explained, "so why not do a handful of these shows in select markets? A lot of them weren't old enough to see those songs when we were originally playing them in the mid-'90s, so we think it'll be a real exciting event for them."

Pinkerton dissed upon its initial release

Though now regarded as one of Weezer's finest hours, Cuomo recalls that the critical reaction to Pinkerton, released in 1996, was anything but pretty. "We put out Pinkerton, and it seemed like what I was hearing at that point was, 'What happened to our fun band? They're catchy and poppy and fun and energetic, and now they're...bizarre, grotesque, obscene, noisy...' And at the same time, it was such a personal record for me. I felt like I was saying, 'OK, world! Here's the truth. Here's what I'm really like.'

"I guess part of me assumed that it was going to be very successful, and I'd become like this superstar, because the record was so focused on me. And it came out and sold a tenth of the Blue Album...That was just crushing for me - all of that together - and it took a while to build up the confidence to even step back in the spotlight again."

Stepping back into the spotlight took some time, but now there's no stopping Cuomo. Along with the reissue of Pinkerton, which features 25 demos, outtakes and live tracks (check out Getting Up And Leaving, above), there will be a third Alone CD - which Cuomo said will include tracks from the 'lost' album, Songs From the Black Hole - and the publication of what he terms The Pinkerton Diaries, a collection of Cuomo's journals, e-mails, letters and Harvard papers from 1994-97 ("so you can get an inside look at exactly what I was thinking"). And if that weren't enough, there's a new compilation called Death To False Metal. (Check out one of the album's tracks, Blowin' My Stack, below.)

Although there is a fair amount of crunchy guitar on Death To False Metal, it's a decidedly pop affair. When asked if the album's title was intended to be ironic, Cuomo told MusicRadar, "I was very much into Slayer as a teenager, and Metallica, and what I would have thought of as the real metal. And that was an expression we used to kick around - "Death to false metal" - because it seemed like there were so many bands coming up that didn't have that; the integrity of the bands that we loved, my brother and I and our friends.

"And so I had just been talking to my brother a few months ago, and we were reminiscing about those times, and he reminded me of that expression - "Death to false metal." And it just gave me such a warm feeling of a time in my life when I took musical style so seriously."

One odd (but entirely sublime) addition to Death To False Metal is the band's cover of Toni Braxton's R&B power ballad Unbreak My Heart. Here, too, Cuomo denied any trace of irony: "I loved that song. It was actually Rick Rubin's suggestion. We both loved that song, and we both thought it would be great for Weezer and for my voice, and it'd be great to do like a rock version of it with more of an alternative aesthetic. And you know, just the way I would sing it versus in the way Toni Braxton would sing it.

"I love the way it came out, and I think probably the rest of the band really does not like it, and that's probably why it didn't make our fifth record, in 2005, when we were recording it."