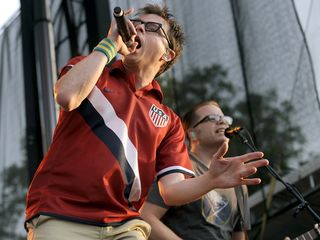 Love Weezer's first record (aka The Blue Album)? Love their second disc, Pinkerton? Well, you're about to be in hog heaven, because Rivers Cuomo and co are planning what's being called a 'Blinkerton' tour later this year, during which the band will play both albums in back-to-back shows in select cities.

As of this writing, there are no confirmed dates, but an official announcement states that Weeer will perform two concerts in each market, and that "on the first night Weezer will play 'The Blue Album' in its entirety, and the second night they will play 'Pinkerton' in its entirety."

This all comes as a bit of a surprise, seeing as the group has just released Hurley, their first album for Epitaph Records. Being the maverick kind of guy that he is, though, Rivers Cuomo is already looking ahead to his next CD. During an interview with the A.V. Club, Cuomo said that the newest record - meaning the one he's already making - will be a stark contrast to the somber vibe on Hurley.

"I was talking to the producer and he was saying, 'These songs sound totally different from Hurley,'" said Cuomo. "'Hurley was kind of dark, and the new songs sound like you're 16, riding your bicycle to get a Slurpee.' As a writer, I had no idea -I wasn't shooting for anything different. That's just what happened to come up."