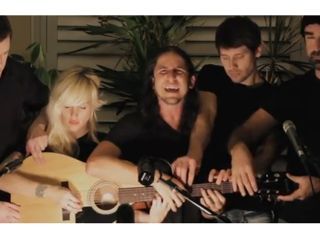 Four men, one woman and a guitar are Walk Off The Earth keys to success

How many hands does it take to work one guitar and create a YouTube video sensation? Ten, apparently, if the clip in question is Walk Off The Earth's inventive and engaging cover of Gotye's Somebody That I Used To Know.

And what a sensation it is: In just 10 days, over 21 million people have viewed the video in which the five-member Burlington, Ontario band huddle around a single acoustic and play it simultaneously while taking turns singing. Guitar-wise, they do it all - picking, strumming, tapping, drumming, you name it.

(And if you think it's easy, think again: the live video took 26 takes and 14 hours of filming to nail a mistake-free performance.)

Comprised of Ryan Marshall, Sarah Blackwood, Gianni Luminati, Mike Taylor, Joel Cassady, Walk Off The Earth have experienced a fair amount of YouTube fame in the past, having posted eye-and-ear-catching YouTube covers of songs by Radiohead, Bobby McFerrin and LMFAO. But their Gotye reinterpretation is taking on a life of its own, and the music industry is taking notice.

"We have been inundated with press, performance and record label contacts from all around the world over the past week," Cassady told the Toronto Indie Music Examiner. "We're traveling to Los Angeles next week to speak with some label reps and will also be performing the cover on live TV."

Live TV? Guess they're going to have to bring it in just one take. Pressure...