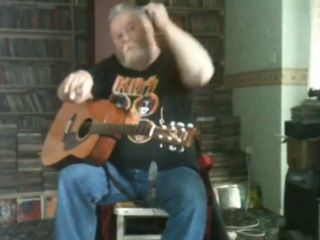 This is especially true if you're a middle-aged gentleman (and we use the prefix loosely here) who goes by the handle of "The Treeman."

Thanks to our friends at Guitar World, we've been introduced to The Treeman's world, and what a wild and woolly place it is. For The Treeman, you see, who hails from Liverpool, is trying to master certain songs he's written, and it's making him, well, a tad loopy.

In the first video (above), The Treeman attempts to play the acoustic intro to his composition Ghost Of Love. Needless to say, things just don't turn out right. Throwing an enormous hissy fit, the guitarist yells "Everytime - it's not fuckin' fair!" And with that, he kicks over a guitar, a chair and a bookcase. "That's it, I'm not doing it! I've had enough!" he snorts, storming off.

A couple of guitars and tee-shirts later, he's back at it. But the song again vexes him and he berates himself mercilessly: "Will you let me do it?" he shouts at his hands while smacking them against a wall. "You stupid hands, just let me do it!"

But give it up for The Treeman - he keeps at it.

In the newest video installment documenting The Treeman's trevails, he attempts to sing and play guitar to another of his compositions, this one being a little ditty called Magic Man.

"Your fingers are playing tricks on you, making you look like an idiot," the cameraman says after a few bonks. The Treeman is not amused.

The guitarist changes shirts - he seems to favor a KISS Rock And Roll Over baby - and halfway into the clip he goes nuts, kicking an acoustic to smithereens.

"John, you just broke your guitar!" says the startled cameraman. "I don't give a shit!" barks The Treeman.

Trooper that he is, he tries again...and sadly, he blows it badly. "That's it, I've had enough!" The Treeman yells. "I'm gonna do the other fuckin' songs. I'm not doing that one no fuckin' more."

Seconds later, he's got his nose to the grindstone. Truth be told, he's OK on the chordal section, but when it comes to the little lead break up he's against the wall. He goes apeshit again, smashing an already broken guitar to even smaller pieces.

Will The Treeman ever perfect Magic Man? Guess we'll have to wait for Part Three to find out.