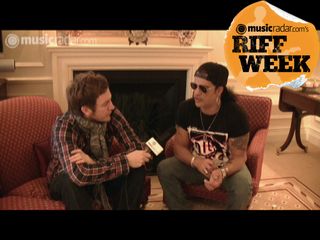 Slash: in conversation with MusicRadar

The morning after a heavy night at the star-studded Classic Rock Awards, we caught up with former Guns N' Roses, current Velvet Revolver and solo guitar star Slash to talk riffs. And he knows his riff onions. After all, he's written some of the greatest of all time.

Who better then to kick off Riff Week on MusicRadar and tell us precisely what makes a killer guitar riff?

What's your favourite riff of all time?

"I was thinking Whole Lotta Love. I remember when that record came out - fuck, I was a little kid. But you know, Black Dog is another one. Zeppelin had probably the biggest cache of killer riffs, more than any other band, y' know. I could go on… there's so many great riffs it's hard to go, this is the one."

Which of your own riffs are you most proud of?

"I've always dug Paradise City, I always thought it was great. Rocket Queen was something that I was pretty fond of. And 'Jungle's great. Everybody seems to like Sweet Child O' Mine and that's a pretty cool riff, but I'd probably opt for Welcome To The Jungle over Sweet Child O' Mine."

Check out the video above for much more, including Slash's advice for aspiring riff writers. Click here to read the track-by-track guide to Slash's new 2010 solo album in his own words.