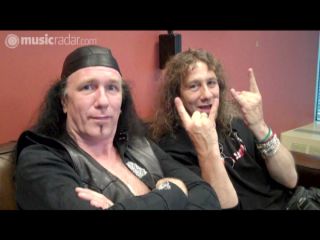 For Reiner and "Lips," Thirteen is their lucky number

Anvil are stars. Well, sort of. It's only taken guitarist-frontman Steve "Lips" Kudlow and drummer Robb Reiner 36 years to become almost-household names, but thanks to a funny, heartbreaking and altogether inspiring documentary Anvil: The Story Of Anvil, the group just might have a shot at the success that always eluded them.

Directed by screenwriter and former Anvil roadie Sacha Gervasi, Anvil: The Story Of Anvil was a instant buzz flick at film festivals in 2008.

Sensing that a real-life Spinal Tap just might resonate with audiences (at one point, the movie shows the band being paid in goulash rather than cash after playing a club in the Czech Republic), VH1 Films picked up the doc and released it to almost unprecedented critical acclaim (it scored a startling 98% on Rotten Tomatoes).

Doc was a gamble that paid off

It hasn't done too badly at the box office, either, and as Kudlow sees it, "The movie basically saved our career. People know who we are now. They know our history. They know we sacrificed everything for our music. And they know we were one of the originators of hard, powerful metal - music that influenced so many bands."

"This is our first real moment in the sun," says Reiner, "and it's not going to be our last. We have the kind of record to see to that."

Reiner is referring to This Is Thirteen, which is - you guessed it - Anvil's 13th release. Recorded by veteran metal producer Chris Tsangarides in 2006 and now being distributed by VH1 Classic Records (on 15 September), the album is a tuneful, intentionally tasteless ("we're funny guys!" says Kudlow) and solid collection of thrashy rock that occasionally slows down to mid-tempo land.

Significantly, the CD features a bonus track of the song Thumb Hang, one of the first ditties Kudlow and Reiner wrote together as teenagers. "It's probably one of our most famous songs," says Kudlow. "Everybody's talked about it, so now they can hear it in all its glory."

And if that weren't enough, the DVD of Anvil: The Story Of Anvil is now out on DVD. "It's important that people watch the DVD," Reiner says. "Its one of the best documentaries ever made, and it really shows the human side fo making music. Sometimes success doesn't always happen overnight. Sometimes it takes almost 40 years. That's OK - we always knew we were going to make it eventually."