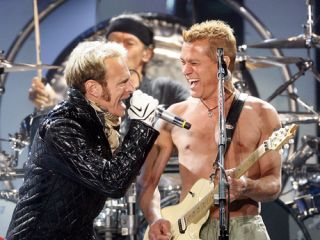 Will we hear new VH music on 30 November? © Mario Anzuoni/Reuters/Corbis

Last summer, we thought we'd be listening to a new Van Halen album by now, or at the very least a single. There were a few false alarms, the biggest being David Lee Roth's "Get ready..." message which appeared on his website.

More Van Halen news is a-happening, sort of, and the latest comes from the folks behind the Grammys, who are strongly suggesting that the band will be appearing at the 30 November Grammy Nominations Concert at Los Angeles' Nokia Theater to announce that they will perform at the actual Grammy Awards in February. Word is that the band will also use the opportunity to announce details of their upcoming album and tour.

In an announcement hyping the hour-long nominations concert, the Recording Academy said the show would feature "a special live announcement from a truly iconic group regarding their historic band reunion set to take place."

This was followed by a Tweet which read: "Who do u predict the reuniting band will be @#GRAMMYnoms...Does this hint make u wanna 'Jump' and 'Dance the Night Away?'"

Besides being obvious as hell, it's also factually wrong, as Van Halen haven't officially reunited: Although lead singer David Lee Roth rejoined the band in 2007 for a year-long tour, bassist Michael Anthony was replaced by Eddie Van Halen's son Wolfgang.

In any event, we're certainly interested to see if Van Halen perform a new song during the 30 November concert.