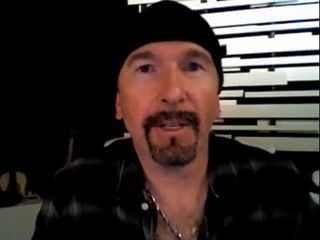 The Edge jokes that, under medication, Bono promised him his car and other valuables

U2's The Edge has issued a video statement in which he talks about Bono's back injury and surgery, which has forced the band to cancel their first-ever Glastonbury performance and postpone the next leg of their U2360 Tour.

Discussing the singer's surgery last Friday, Edge said jokingly, "I spoke to Bono immediately, like, a few hours after he came out of the operation, but he wasn't making any sense, I can tell you. Whatever he was on, he didn't remember any of the conversation, which is a shame because he promised me his car and various other valuables…a few paintings. But he claims not to remember that conversation."

As for what led up to Bono's back injury, which has been described as "a severe compression of the sciatic nerve, the guitarist said, "He was in a fairly intense program to be ready for the tour, so something in that preparation…maybe he just overdid it and hurt himself maybe without realizing it. It could have got worse. But luckily enough, he did realize, at a certain point, I think when he could no longer walk that actually he needed to go to the doctor."

Joking again, Edge said that "this is probably the most rest [Bono will] have had in decades, the few weeks after the operation. But the other thing we have to make sure is that he does follow the doctor's orders in terms of the program of the rehabilitation….So we'll be there to chain him down if need be."

Although U2 were looking forward to heading back on the road, Edge revealed that he is "already back at work on songwriting for the next U2 record. When we do get back out there we'll be in top condition and raring to go. That's our focus now."