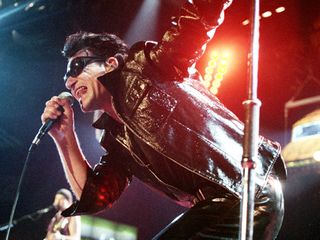 Bono performing on the Zoo TV tour that followed the release of Achtung Baby. © Andrew Fox/Corbis

When U2 played their last show of the 1980s, a New Year's Eve blow-out at The Point in Dublin, the ever enigmatic Bono announced a farewell of sorts, telling fans "we have to go away and just dream it all up again".

It was a signal that the hometown boys who had become the biggest rock group in the world were about to enter a period of transition, that their conquering of the globe wasn't quite panning out the way they had expected.

A very different U2 emerged almost two years later, with the release of Achtung Baby in November 1991, and the story of that transition is told in a new documentary, From The Sky Down, to be shown on BBC1 this weekend.

Although ostensibly about the making of Achtung Baby, the first half of director Davis Guggenheim's 90-minute film finds the group analysing how the wheels very nearly came off the U2 wagon and what prompted such a radical makeover, from the wide open America spaces of The Joshua Tree to a more claustrophobic, angular and European sound.

It's clear that the runaway success of The Joshua Tree in 1987 took them by surprise, band members admitting they weren't entirely prepared for the leap from arenas to stadiums that followed in the album's wake, and that Bono in particular wasn't comfortable with his newfound rock god status.

"I couldn't have imagined what we were to become," he tells the cameras. "The 80s suffered a lot from my own intensity. Our rehearsals largely consisted of me shouting at - and over - people, and I don't know how they put up with that."

Curiously, it was an earlier U2 film that provided the wake-up call; 1988's Rattle & Hum looked a good idea on paper, an opportunity to consolidate their position at rock's top table with a behind-the-scenes documentary and accompanying album of live recordings and a handful of new studio cuts.

The film was met by widespread negative or, at best, lukewarm reviews, and the band themselves saw, arguably for the first time, how they looked in the eyes of others. "There's no joy in it," is Bono's verdict, while bassist Adam Clayton is even more brutal in his summation, declaring that they came across as "earnest and po-faced."

Always handy with media-friendly soundbite, Bono tells us that the time had come to "get a big chainsaw and chop down The Joshua Tree."

Decamping to Berlin's Hansa studios, where their boyhood heroes David Bowie and Lou Reed had made some of their own best records, U2's reinvention didn't start smoothly. Drummer Larry Mullen in particular found it hard to align his own physical style with the loops and samples initially laid down at Dublin's Windmill studios. "I didn't know how to give myself to it," he says.

Months of trial and error followed, the shift in working practices resulting in a slew of brief musical passages, embryonic riffs and melodies, but little in the way of tangible tunes. The breakthrough came with One (today one of their most enduring hits), a song where the component parts fell together almost by accident. "Nothing was going right," says The Edge, "but then we were presented with this gift that steadied everyone's nerves."

Ultimately, Achtung Baby would go on to sell 18 million copies worldwide, and its sense of sonic adventure arguably informs everything U2 have tried their hand at in the ensuing 20 years. It was a daring makeover, the band all too aware that had it not worked their career might well have been over.

"You have to reject one expression of the band before you get to the next, and in between you have nothing," says Bono. "You have to risk it all."

From The Sky Down is screened on BBC1 on 9 October, and will be included in the deluxe 10-disc 20th anniversary edition of Achtung Baby, out on 31 October, which will be previewed on MusicRadar soon.